Why ‘The Hunger Games’ Needs to be ‘The Next Twilight’

Crystal Watanabe Archive August 12, 2011 Editorial Comments Off on Why ‘The Hunger Games’ Needs to be ‘The Next Twilight’ 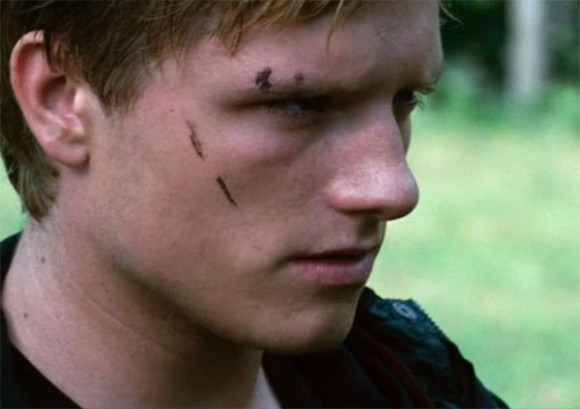 In these days following EW’s Men of the Hunger Games issue, we find ourselves oogling the initial images of Katniss, Peeta, and Gale. The photo of Katniss made it onto the front page slider of IMDB and Google Alerts have been popping up continuously ever since Lionsgate put out the photo of Gale at the reaping on their Hunger Games Facebook page. Today, Katey Rich of Cinema Blend is asking why Lionsgate is trying to turn this franchise into the next Twilight. Here’s why I think we want this to be the next Twilight.

There’s more than one way to look at such a question. What part of Twilight is Lionsgate hoping to capture? The love triangle that made it a smashing box office success or just the smashing box office success? The central female character or the concept of forever love? Rich is questioning why the only images to surface are those that focus on the love triangle and takes this as evidence that Lionsgate wants this to be all about the big three: Katniss, Peeta, and Gale.

That being said, there really isn’t a love triangle in The Hunger Games. Gale may be a prominent part of Katniss’ life pre-Games, but if I’m not mistaken, he wrapped his scenes in early summer and is already on another set, while filming for The Hunger Games still has a few weeks left. These photos were taken in the first week of June, when the Arena scenes were being shot in Asheville and so the explanation of why these are the only images to surface so far is a simple one: that’s all they had ready for release. The infamous dress that Cinna designs for Katniss’ interview isn’t flaming across the internet because this scene was only filmed last week. The Opening Ceremonies were filmed this week.

If we’re talking Twilight-esque box office success, who can blame Lionsgate for wanting that? I want that. Sure, I picked up Twilight and went through a few months of obsessive mooning over Edward, but in the end I got over it and realized that while it was a great throwback to my teenage years, that didn’t make Bella the most stellar female protagonist and it certainly didn’t make the Twilight Saga a great story. Being a mother, I want The Hunger Games to be the next Twilight simply because it worries me that so many girls out there look to Bella and Edward as the definition of love. It pains me that Stephenie Meyer’s storyline is up on so high a pedestal. Sure, people in this world find true love and live wonderful lives together, but that’s certainly not the norm. And let’s face it, no girl is going to find a 110 year old virgin vampire for themselves. And yet this fantasy sticks like glue to the minds of so many young, impressionable girls out there.

In contrast, Katniss and Peeta never have it easy. Their happy ending isn’t really happy; it’s just moderately peaceful. They work at their relationship for the rest of their lives and this is a more realistic outlook on love, marriage, and togetherness. It takes effort and resolve. Katniss is the direct opposite of Bella in that she doesn’t want to choose between Gale and Peeta simply because she doesn’t want either of them. She doesn’t want love. She doesn’t want marriage and she most certainly does not want children. She wants food on the table and Prim living a full and happy life. She just wants to survive.

Should The Hunger Games gain the popularity of Twilight, it’s not going to be because of the marketing of a love triangle that really doesn’t emerge until Catching Fire, which we now know to be more than two years away. The popularity of The Hunger Games will rest on the shoulders of Katniss and Peeta and the tragedy of the unrequited love of a baker’s boy with a heart of gold. We love Peeta because to his core he is caring, sweet, and innocent and being sent to his death with the girl he loves. This is the kind of boy I can get behind, not one who flies into trees or breaks into bedrooms to watch someone sleep. Bella’s attraction to Edward was the only thing that made his actions heart-thumpingly exciting. Take that away and he’s just a creepy stalker. He knows this himself and loathes himself for it.

And then there’s Katniss, who is utterly selfless. She becomes head of her family at the age of eleven. She provides, she’s tough, and she’s at times heartless (Buttercup, anyone?). One of the few problems with Katniss is her tendency to assume that everyone around her can read her mind and we certainly can allow her this flaw because without it the story weakens. While she has made up her mind never to marry or bear children, I don’t think she ever says this to Gale or Peeta (correct me if I’m wrong). She doesn’t understand why anyone would want her, blinded by her own hardheadedness and the defenses which she built up only so she could survive in the first place. And yet her naiveté is what makes her such a strong character. Her fierce resolve is what creates the tension of Catching Fire and Mockingjay.

These are two characters that I would happily encourage young adults look up to and that is why I do hope that The Hunger Games is the next Twilight Saga. It’s not that girls need to be hardhearted and loveless, but they need Katniss’ strength and survival instincts. They need to love the boy with the bread more than they love Edward Cullen. The young adults out there just flat out need someone better to look up to.

Kids killing kids can be a tough pill to swallow and for that reason I think The Hunger Games finds itself at a disadvantage with such a sensitive theme, along with Lionsgate’s desire to make this PG-13. It’ll be interesting to see the balance that Gary Ross uses to keep the rating while not sacrificing what makes The Hunger Games such a tragic and violent symbol of oppression.

Images of Katniss in her Girl on Fire dress will come, as will images of our District 12 drunk Haymitch Abernathy, our beloved stylist Cinna, and the pink-coiffed and bubbly Effie Trinket. We can’t assume that a love triangle that isn’t really there will be the lynch pin of Lionsgate’s marketing simply because it’s too early. If this were November and this was all we had, I’d be more worried, but at this point, I’m still just happy to see this happening at all.

All posts under the "Crystal Watanabe Archive" were originally written by Crystal Watanabe and posted on Mockingjay.net. Original comments have been deleted and discussion closed.
@http://twitter.com/pikko/
Next The Nail Polish That Was On Fire – ‘The Hunger Games’ Deal Leads to Lawsuit