Crystal Watanabe Archive November 25, 2011 Editorial Comments Off on The Nail Polish That Was On Fire – ‘The Hunger Games’ Deal Leads to Lawsuit 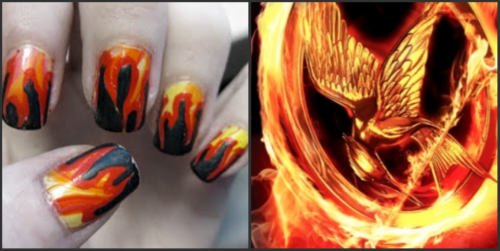 If there’s one thing that’s always struck me as ironic about ‘The Hunger Games’, it’s the notion that in painting the citizens of the Capitol in such a negative way, Suzanne Collins is trying to get people to look within at the Capitol citizen inside themselves. And yet when I first heard about the plans for a nail polish line based on ‘The Hunger Games’, like so many other people in the fandom, I got really excited. I started picking out which ones I’d buy first even though I don’t even really use nail polish. I just couldn’t help myself. I told myself I could buy them all for my daughter and make her and myself very happy at the same time. How very Capitol-like of me. I’m sure most of you felt the same when you caught wind of the story.

When the nail polish story first began appearing around the internet, we weren’t sure what to make of it. It was posted on a Dutch site and didn’t look like something people could purchase anyway. Then we began to hear rumors that the nail polish line was real when Bella Sugar claimed to have called China Glaze and gotten confirmation of a deal and that it was going to be an official movie tie-in product, but before we could post about it, opposing news came about through story updates stating that it wasn’t true and that a deal was still being sought. We decided to sit tight until more concrete news was available.

Today, the Hollywood Reporter revealed that American International Industries is suing Lionsgate for illegal termination of their contract to produce a line of Hunger Games nail polish over claims that news of the nail polish had been leaked. Claiming that they spent millions of dollars on materials to produce the line, American International Industies is asking for $10 million in damages. Essentially, because the news flared out from Tumblr to Twitter to fansites to big fashion sites, Lionsgate began denying that a deal was in place and supposedly canceled the whole thing because of it. While it’s not clear exactly what went wrong here, speculation points to a drastically disappointing lapse in communication within Lionsgate or within American International Industries, but most certainly between the two companies.

Things don’t seem to add up on either side of the argument. If there was no contract to begin with, as was being told to press, why was the non-existent contract then terminated by Lionsgate? $10 million, like most lawsuits tend to be, seems like an over inflated amount meant to result in a settlement of some kind. Still, you would think that a company wouldn’t go ahead with the purchasing of a massive amount of supplies unless they had the paperwork to cover their behinds. So unless China Glaze is in the habit of jumping the gun to the tune of millions of dollars, all this seems to weigh in favor of the existence of a deal.

So why the secrecy and why the knee-jerk reaction from Lionsgate? Was there a legal clause that stipulated secrecy until Lionsgate made the announcement themselves? If there was, evidence seems to be in their favor since Bella Sugar said they called a China Glaze rep to confirm. The glazes were made, named, and the image posted on a website. If that’s not “leaked” then I don’t know what is. So did some representative unknowingly blow the lid off of a secret deal? Just where did that image of the nail polish colors come from? Did internet savvy Tumblr users just cause a $10 million chip in Lionsgate’s profits from ‘The Hunger Games’? With all eyes in Hollywood focused on the success or failure of Lionsgate’s biggest venture yet, this is surely to cause quite the stir in online media in the days to come.

And it’s over nail polish.

As a fan and as a representative for Mockingjay.net, I don’t really want to take sides in this argument. I do, however, want to take the time to cement my status as a pre-Panem Capitol citizen and plead with both sides to come to some kind of agreement over this so that us fans can buy your darned “Primrose”, “Cinna-mon” and “Catnip” nail polishes like the good little Capitol citizens we are. Drop the lawsuit, work this out with each other, and make this work in your favor. If anything, this is massive free publicity for the nail polish line. Fans will be lining up to watch The Hunger Games on March 22, 2012. Make sure they’re wearing “Fire in Flight” when they do.

All posts under the "Crystal Watanabe Archive" were originally written by Crystal Watanabe and posted on Mockingjay.net. Original comments have been deleted and discussion closed.
@http://twitter.com/pikko/
Previous Why ‘The Hunger Games’ Needs to be ‘The Next Twilight’
Next Review and Giveaway #1 – Mockingjay Cord Necklace