By the Book: Catching Fire Chapter 3

Several weeks ago, the Mockingjay.net staff began our special By the Book feature, where we analyze ‘Catching Fire’ chapter by chapter. We share what scenes from the chapter we believe will make it into the movie, what our favorite lines are, and what we’re afraid might be cut from the film.

By the Book will contain SPOILERS for Catching Fire, so if you haven’t read the book and don’t want to know the story, stop reading right now!

In Chapter 3, Katniss is left reeling after President Snow’s visit. She doesn’t have much time to process it before Cinna and prep team arrive and she and Peeta depart on their Victory Tour. While the train is stopped for refueling, Katniss goes outside with Haymitch and tells him about her conversation with the president and asks him to help her get through the tour. Haymitch tells her that she’ll have to pretend to be in love with Peeta for much longer than the tour if she wants to keep her friends and family safe– she’ll have to pretend for the rest of her life.

I think once Snow leaves we’ll need a very short breather so I’d like the start of this chapter to make the cut. Alone in the study, a moment to let the gravity of her situation sync in and then we see her taking the burden alone and hiding it from her family. I like the idea of Katniss in the bath, a little quiet to herself before the Capitol descends upon her. The bulk of this chapter will be trimmed drastically and I have little hope for Katniss’ talent, Cinna or the stylist banter but Effie would be a brilliant exposition filler at this point: briefly describing all about the Victory Tour, the schedule, what’s expected of her and Peeta etc. While this is going on we need to see Prim again and that would be a great opportunity to do the ‘Bam!’ moment when Katniss is reminded of Rue. Maybe have Prim peer around the corner like Rue in the training centre. It would be a nice reminder that the Games and Rue’s death has never left her and would lead in nicely to the scene in District 11. And I want the little moment when her mother hands her the mockingjay pin ʺfor luck.ʺ I think at the train station we’ll have Peeta and Katniss waving to the cameras, so in love and entering the train, doors shut and we see the smiles on their faces drop slowly, the love between them fall apart. I think it would be a nice contrast to show what is (ahem) real and not real. The first film established the trust between Katniss and Haymitch so he’d be the perfect person to reassess the dangers of the situation with for the audience and perhaps a brief nod to the horrors of being a mentor and the Quarter Quell.

Haymitch: ʺYou and Peeta, you’ll be mentors now, every year from here on out. And every year they’ll revisit the romance and broadcast the details of your private life, and you’ll never, ever be able to do anything but live happily ever after with that boy.ʺ

I’m not entirely sure how they’re going to handle the information found in Chapter 3. I don’t have very high hopes for any of it making it into the movie, actually. I can see them cutting Katniss reassuring her mother, the entire scene with the prep team, and I’m pretty certain that we won’t see or hear anything about the Victor’s ‘talents’ so Cinna bringing all those dresses to her house probably won’t make it. As much as I want the scene with Katniss telling Haymitch about President Snow’s visit, it won’t make much sense to go from the scene of President Snow threatening her and moving straight to her telling Haymitch about that threat. Personally, I think they will extend the scene in District 11, where Katniss tells Peeta what happened. He’ll storm off, but Katniss and Haymitch will stay longer and she’ll say ʺIf you can just help me get through this trip.ʺ I’d love to see Katniss and Peeta running toward each other through the snow before the tour starts, but for the sake of time I believe that will be cut and we’ll see a shot of them boarding the train–perhaps of her waving good-bye to her mom, Prim, and then not waving at Gale– and then we’ll see a shot of the train arriving in District 11.

Even if they don’t use these lines until later, I want them to include Katniss saying ʺIf you can just help me get through this tripʺ and Haymitch saying ʺYou’ll never, ever be able to do anything but live happily ever after with that boy.ʺ

I really felt for Katniss in Chapter 3, President Snow’s visit has left her reeling, then immediately she has to start playing the part and preparing for the Victory Tour, filming her talent and appearing on camera with Peeta again for the first time in months. I don’t think that a lot of Chapter 3 will make it to the screen, given the time spent with the prep team and that most of it is Katniss’ inner monologue, but there are definitely important elements to show. I would like to see a little chatter with the prep team, especially as later on it is from Venia, Octavia and Flavius that Katniss discovers which districts are rebelling, though as they were seen for about 30 seconds in ‘The Hunger Games’ their role will probably be shortened again. I’d be happy for it to be shortened/cut as long as there is some time spent with Cinna, as they must show how close they’ve become and how important this relationship is to Katniss, so even if they do cut the talents he could still be present due to the Victory Tour. By far and away though the most pivotal moment of this chapter is its closing paragraphs, when Katniss confides in Haymitch. The stakes are raised even higher as Katniss goes from worrying about the intermediate future to the long-term future, and those scenes simply must be included so that later events make sense. Although as Erin has noted if they do shuffle the kiss and President Snows visit around, it may not make much sense movie wise for Katniss to tell Haymitch straightaway about Snow’s visit. I thought that Woody and Jen did a terrific job on the roof at the end of ‘The Hunger Games’, so I’m looking forward to more of their interactions in ‘Catching Fire’.

Haymitch: ʺ…you’ll never, ever be able to do anything but live happily ever after with that boy…Do you understand what I mean?ʺ

All posts under the "Erin Poulin Archive" were originally written by Erin Poulin and posted on Mockingjay.net. Original comments have been deleted and discussion closed.
Previous The Hunger Games’ Five Lessons in Human Goodness
Next By the Book: Catching Fire Chapter 4 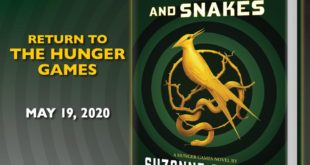 If you're a subscriber of the Amazon Prime service, here's your excuse to sit back and watch this amazing film one more time (or, you know, a few more times).