Review: ‘Catching Fire’ a Near-Flawless Tribute to the Heart of The Hunger Games

Crystal Watanabe Archive November 22, 2013 Reviews Comments Off on Review: ‘Catching Fire’ a Near-Flawless Tribute to the Heart of The Hunger Games

This review is written by Mockingjay.net staffer Crystal Watanabe. There are movie SPOILERS in this review.

Six hundred and twenty days ago today, I sat in the Nokia Theatre and tried my best to hide my disappointment. Everyone around me was thrilled and it felt wrong to put a damper on the high everyone was feeling. As people raved around me, I felt like saying something completely different. 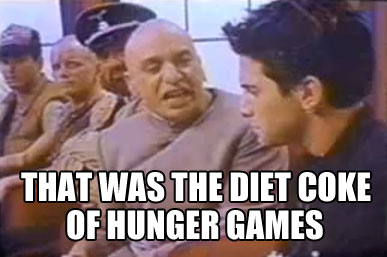 I’d gone into the film with a blind trust in Gary Ross, expecting to see my favorite book of the series come to life in all of its tragic and moving glory. While Ross did bring Panem to life and delivered an impressive introduction to what has become a global phenomenon, on its own The Hunger Games movie is ultimately Gary Ross’ Hunger Games and not Suzanne Collins’.

It’s been a rough ride these past 20 months. When Francis Lawrence first came on board, this site quickly became riddled with comments about how amazing he was going to be and how people trusted him fully with the franchise. I wasn’t about to make the same mistake twice and for that reason I remained cautious. Then we had a couple of Mockingjay Movie Nights and watched Constantine and I Am Legend. I quickly became consumed with the fear that Lionsgate had screwed the pooch.

Yesterday, I felt sick as the hours ticked by. I was completely nervous about finally seeing the film. Was I going to have to go through the same experience? So many people in this fandom had already seen it and I saw nothing but raving reviews. I wanted to love it so much, but I was terrified I’d end up spending the next year once again being the bitter old Mockingjay.net admin pouting like a child over what was simply a movie. And that’s probably the best way to describe just what I found so disappointing about The Hunger Games: it was just a movie.

Francis Lawrence’s Catching Fire, on the other hand, seemed to do the impossible. The film that I saw last night was masterfully adapted and brought something back into the franchise that I’d thought was lost: the heart of the series. It actually made up for The Hunger Games’ shortcomings. Where Peeta’s realization about Katniss’ act in the Arena was carelessly glazed over in the first film, Lawrence shores up that flaw by very clearly establishing the precarious and wooden relationship Katniss and Peeta have to suffer through after the Games. Katniss’ attack on Haymitch and her emotional repeating of, “You’re a liar…” almost makes me forget the post-Games hovercraft scene I missed the most in the 74th.

It was like watching a book’s soul float out from the pages onto the screen. What Lawrence and the cast achieved was amazing. This wasn’t just a movie, it was all the tragedy, wonder, and extravagance of Collins’ story of Katniss Everdeen in the world of Panem brilliantly displayed for the world to see and experience. 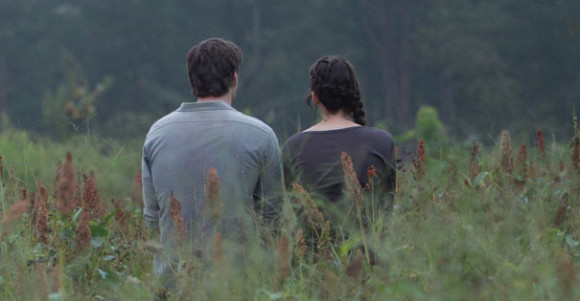 Liam Hemsworth was astonishingly better in this film, in both acting and character development. His Gale made the love triangle seem more realistic than it could have and I appreciated the attention they put into the setup for Katniss’ conflict in Mockingjay. And while I know some people would say that the love triangle is a stupid part of the books, I’ve always felt like Collins wrote a very rare, sincere one for her books. Who Katniss chooses may not be the most important thing as the story progresses, but when the war is over, love will be how life goes on and so the love triangle does have a place of importance in the series.

Elizabeth Banks’ Effie was spectacular as expected and the added scene of her goodbye to them was one that was touching and a wonderful addition. Her look in general exuded a feeling of opulence and extravagance, which makes you naturally assume that her status has been raised in the Capitol because of Katniss and Peeta. Effie very subtly explains why things look so much more fantastical and over-the-top: The Capitol has spared no expense for its two victors and later, on its Third Quarter Quell.

Francis Lawrence did an amazing job bringing the intensity of the Arena to life. Most notably, he made the Cornucopia area much larger, which felt more accurate for the Games in general. Once they enter the Arena, the pace takes off and never really lets go, which is precisely the type of experience you expect with the Games. Toby Jones really could have worked better on his introduction. It was like someone had asked Droopy Dog to kick off the Quarter Quell.

When Sam Claflin was cast as Finnick Odair, I wasn’t exactly thrilled. In the end, though, he was such a sweetheart in real life that I said I’d withhold judgement until seeing his performance. Overall, I thought Claflin did something I didn’t expect with the character: he brought his own version of Finnick Odair to life. On screen, there’s no doubt he’s Finnick, and while he was never going to be able to compete with a character written upon a pedestal, what he did was just what was needed to make Finnick a real character. Claflin’s performance paid tribute to Finnick as a person and highlighted the importance of choosing someone who could deliver the core of the character in more ways than the Capitol’s golden boy.

Jena Malone’s performance as Johanna Mason was something to be marveled at. The elevator scene was wonderfully adapted for film and one that I think was stronger than the book. The added scene where she cusses in front of the audience was definitely a standout moment in the Capitol. The scornful determination that she treated Katniss with made for an amazing balance between the two of them, one that I’m sure will become of great importance in the next two films.

Josh Hutcherson turned out an amazing performance as the Boy with the Bread. His Peeta felt so much more genuine and heartfelt. And while I know Josh identifies with his character greatly, you could really sense how much he put into the Peeta we saw on screen. There’s an indescribable difference between Josh and Peeta in that his performance very accurately shows us a Peeta living in Panem with the choices placed in front of him. He is stronger than a love-besotted boy. He is fiercely loyal and selfless to a fault and this is the Peeta we all know and love. He doesn’t need to voice his love for Katniss in cheesy dialogue, you can simply see it written all over his face and sense it in his actions.

A very surprisingly large amount of straight-from-the-book scenes made the cut, which I found refreshing at times and ever so slightly awkwardly executed in others. I was particularly amazed at the fact that they included Mags’ volunteering for Annie Cresta, featuring Stef Dawson who wasn’t cast until five months after filming for Catching Fire wrapped. Touching yet chilling scenes with Snow’s granddaughter give the perfect hint of rebellion hidden within childish innocence. It’s moments like those that make you realize just how much Francis Lawrence values the source material. The man clearly loves the books as much as we do.

Philip Seymour Hoffman’s Plutarch Heavensbee was made particularly impressive with the added scenes between him and President Snow. It gave audiences a much-needed inside look at the political landscape in the upper echelon of the Capitol. And funnily enough, The Beard makes a short cameo in the movie as well.

Woody Harrelson did Haymitch’s character so much justice. The occasional fatherly affection he shows to Katniss along with his snarky demeanor made him the perfect compliment to Effie. I was pleased beyond words that his “You could live a hundred lifetimes” line made it in. Willow Shields does a great job in such a small amount of screen time, showing just how much Prim has grown in not only physical appearance, but awareness as well. She’s no longer the scared little girl from last year’s Reaping; the Games have changed her as well, even as a spectator.

There’s no real way to describe Jennifer Lawrence as Katniss Everdeen other than to say that it’s completely evident that the entire success of the film as a whole rested upon her performance and without that the movie could have fallen apart at the seams. In contrast to her almost flippant attitude after winning the Games last year, we now see a Katniss broken and struggling to make it through each day. This is yet another example of how Catching Fire admirably manages to recapture the emotional baggage that was somehow lost along the way with the first movie. 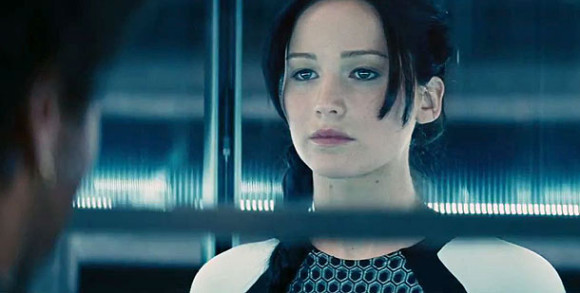 I’ve never been a fan of Lenny Kravitz’s casting as Cinna. Kravitz is too old, too buff, and too hot to be Cinna. Watching him get beaten up only makes you wonder why he doesn’t just get up and beat the crap out of the Peacekeepers in return. But with Katniss watching, trapped in the tube and helpless as she screams, you can’t help but feel her heartache. You can’t help but feel the cold grip of the Capitol as they raise her up into the Arena, already dealt a crushing blow before the Games even begin. We have Jennifer Lawrence to thank for that. We even get to see a peek of her keynote personality when Peeta asks what her favorite color is.

What’s so impressive about Catching Fire is that even with so much going on at once, it manages to paint such an accurate landscape for what’s going on in Panem and set up Mockingjay without feeling fragmented or obvious.

Revolution is brewing, the Capitol has managed to increase the gap between the themselves and the 99%, and they even hint at the horror behind a victor’s glorious lifestyle without really calling much attention to it. In short, the movie somehow managed to do on film what books can do more easily: paint an intricate picture of a machine running on hundreds of moving parts. Filled with so much more substance, Catching Fire will undoubtedly hold wider appeal with older audiences due to more crisp attention to its serious political and societal issues, something that The Hunger Games had more difficulty portraying.

Fans who flock to the theaters this weekend will be hard pressed to find anything to complain about. Changes that were made felt natural and necessary, while omissions were difficult to notice. The heart and soul of Katniss’ inner conflicts are front and center, which makes it easy for me to call this film a near-flawless tribute to what makes these books so compelling. Catching Fire is an overwhelmingly faithful rush of adrenaline that leaves you hungry for what happens next. And judging from what we’ve seen with Catching Fire, the Mockingjay movies are in the hands of a director that has proven himself in one heck of a trial by fire.

All posts under the "Crystal Watanabe Archive" were originally written by Crystal Watanabe and posted on Mockingjay.net. Original comments have been deleted and discussion closed.
@http://twitter.com/pikko/
Previous Review: ‘Catching Fire’ – A Thrill Ride Designed with the Fans In Mind
Next VIDEO and PHOTOS: Mockingjay.net at the ‘Catching Fire’ Berlin Premiere Red Carpet