Dressed to Impress: A Look at the Catching Fire Costumes at FIDM

A week ago I was able to visit the Fashion Institute of Design & Merchandising’s 22nd Annual Art of Motion Picture Costume Design Exhibit. The exhibit showcases over a hundred costumes from recent feature films, including ‘The Hunger Games: Catching Fire’, ‘American Hustle’, and the Academy Award winning ‘The Great Gatsby.’

Despite featuring costumes from 22 films, I was surprised at how small the overall exhibit was. The entire exhibit only filled 2 large rooms and took no more than 20 minutes to breeze through, despite my stopping to look at each costume. Each film had a least 3 costumes on display, and while you couldn’t touch them, you could get close enough to the mannequins to see the detail that goes into each costume. As someone who grew up sewing, I had to marvel at the detail and craft that wento into each outfit. Some of these are only seen on screen from afar for just a few moments and yet they are still amazing pieces of art. I tip my hat/seam ripper to those who work to create such beautiful costumes.

Technically, pictures are not allowed at the exhibit, so these images you are seeing magically appeared on my cell phone (wink, wink). The magical elves who must have slyly taken these photos while dodging security probably didn’t have much time to focus or zoom, so please excuse any images that might be too dark or distant.

This first costume is Johanna Mason’s opening ceremonies “tree costume.” My first reaction? How did she ever walk in those heels? It’s hard to see in these photos but those boots are impressive. Not only are the platforms maybe about 5” high, but a lot of work went into matching them to her bustier. I don’t even remember seeing the shoes in the final film but clearly every bit of the costume was thought out. 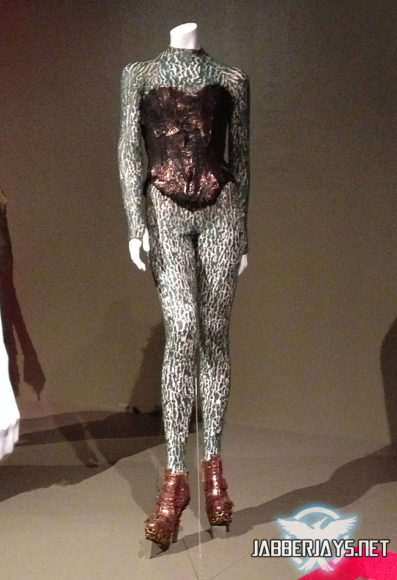 The second costume is Katniss’s Victory Ball dress. Much to my surprise, this was my favorite dress. The detail is amazing. The feathers, glitter, velvet and sheer skirt looked much edgier in person than in the film. Maybe it’s because in the film I was focused on Jennifer’s eye make-up, but I couldn’t stop admiring the work that clearly went into layering the feathers and all the hand stitching. Like many other shoes in the exhibit, these were clearly custom-made for Jennifer Lawrence. But strangely enough, they were just basic black high heels. Maybe Trish Summerville wanted to keep it simple to prevent any tripping on set? 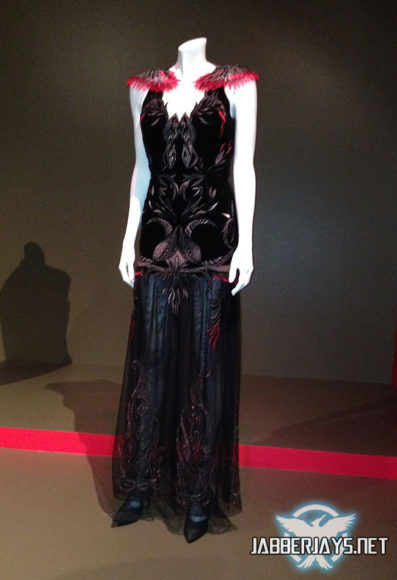 The final costume from ‘The Hunger Games: Catching Fire’ was the dress I was most excited about seeing and sadly it turned out to be the most underwhelming – the mockingjay dress. The dress looked like it was made from rayon and was printed with layered feathers over the material. There were no details and at first glance, could have been something you bought off the rack at Macy’s. This dress is a great example of 2 film departments working together to create something amazing on screen. The costume department needed something that would allow visual effects to create the feathers, fire and wings that eventually impress on screen. Clearly visual effects asked for something matte and simple, so they had a “canvas” to work with. So while the real dress may not have been as impressive, the final dress in the film was something I loved. 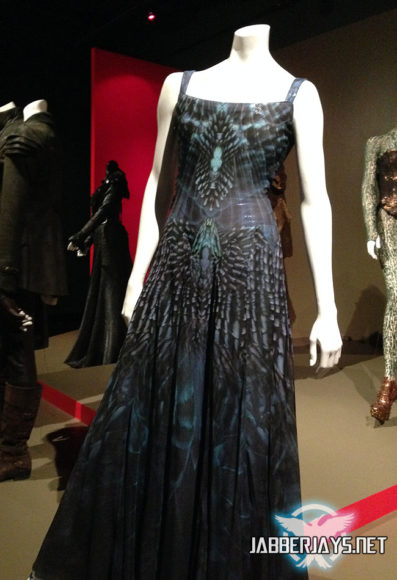 This last costume is a bonus Jennifer Lawrence costume from ‘American Hustle’. The display had the entire look, right down to the jewelry, handbag, fur jacket, and a mannequin with “hair” styled like Jennifer’s during the film. The dress looked as slippery and thin in person as it did in the film, though maybe that is just me speaking as a conservative dresser. 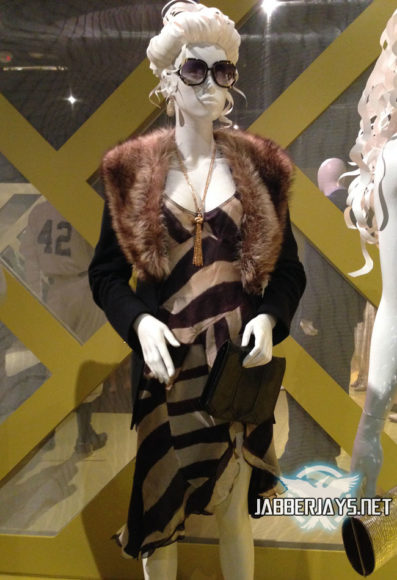 FIDM is located in downtown Los Angeles and the exhibit is free and open to the public. It will run until April 26. Details on the exhibit and how to visit the FIDM Museum are here.

Bonus exhibit: If you do visit the museum, don’t forget to turn the corner and check out the single-room display of 19th century wedding gowns. These dresses will make you gasp in awe at the tiny waists and short stature of brides from the 1800s.

If you’ve visited the exhibit, what did you think of the costumes? If more costumes were to go on display, what would you like to see? And now that Trish Summerville is no longer the costume designer for ‘Mockingjay Part 1’ and ‘Part 2’, do you think we’ll see an overall change in the “look” of costumes?

Event reporter based in Los Angeles, CA.
Previous Berlin Casting Call Goes Out For Hundreds Of Extras
Next AUDIO: Sam Claflin on the Empire Film Podcast

Lionsgate announced this morning that they will be holding an auction, selling off almost 500 props and costumes from The Hunger Games movies.