WATCH: New Clip and Still of Sam Claflin in ‘The Riot Club’

Turns out Josh Hutcherson isn’t the only one whose upcoming projects are getting publicity this week: in this new clip from The Riot Club, you can see Sam Claflin’s character Alistair Ryle demonstrate his wine-tasting prowess in a… very gross initiation ritual for the titular club. Oh, frat boys…

A still of Sam was also released online this week (thanks to @SamClaflinFans on Twitter for the tip!). 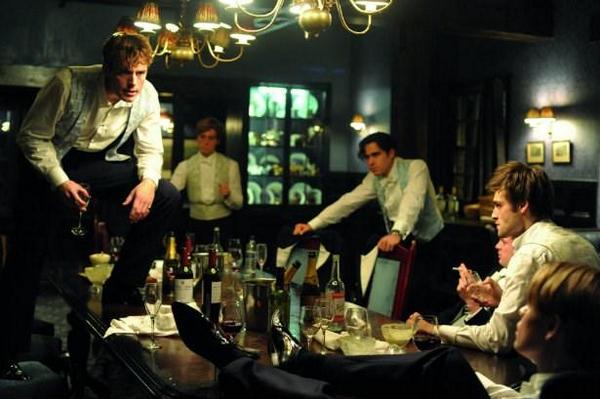 The official synopsis for the film:

Set amongst the privileged elite of Oxford University, THE RIOT CLUB follows Miles (Max Irons) and Alistair (Sam Claflin), two first year students determined to join the infamous Riot Club, where reputations can be made or destroyed over the course of a single evening.

Also starring Douglas Booth and our very own Natalie Dormer, the film opens in the UK in just two weeks: September 19th.

Apart from this, Deadline also reported just yesterday that Sam and Game of Thrones star Emilia Clarke are in talks to star in MGM’s Me Before You, based on Jojo Moyes’ novel of the same title:

Me Before You tells the story of Lou, a small-town girl caught between dead-end jobs, and Will, a success all his life who finds himself wheelchair-bound after an accident. He finds no reason to live until they meet when he hires her as his caretaker for six months, and she becomes determined to prove to him life is worth living. They head for a series of adventures together, which changes each of them.

Keep checking with us as we’ll be sure to tell you more about this project as it materializes! In the meantime, tell us in a comment what you think of the new Riot Club clip and still. Will you be watching this film in theaters?