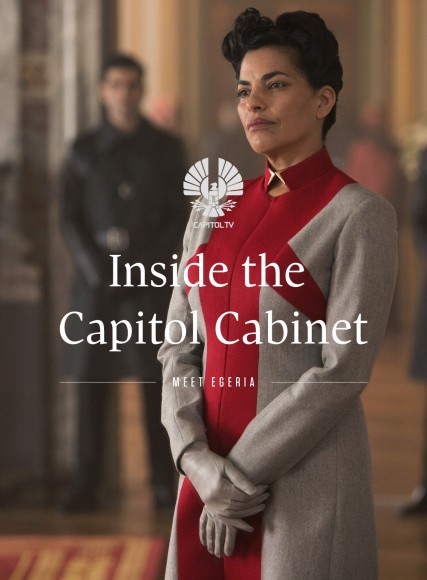 As many of you probably remember, there was a mysterious woman standing next to President Snow in the Our Leader the Mockingjay teaser trailer from Comic Con. That woman was rumored to be Egeria, and we now have confirmation via Capitol Couture that the woman is indeed named Egeria and she is the Capitol Minister of Affairs.

Formerly the Director of Labor Operations in District 2, Egeria apparently always wears gloves. “They’re my assistants, in a way,” Egeria says of her gloves. “When I’m nervous my hands fidget considerably; gloves bring attention to the hands, and therefore the brain to keep them still. It reminds me there’s always someone watching and ready to criticize what I do.”

Egeria is the new leader of the Capitol Ministry of Information. Which means, tributes, this lady is probably why it took so long for the trailer to be released.

Although we previously inquired with Lionsgate whether the actress playing Egeria is Sarita Choudhury from Homeland, we did not receive any confirmation. However, this photo seems like confirmation enough. Choudhury’s IMDb page does not reflect her role in The Hunger Games: Mockingjay.