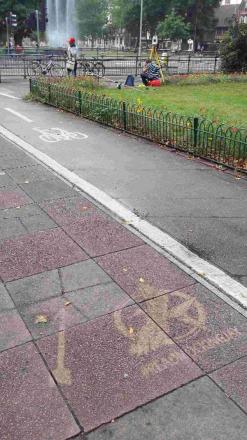 The rebellion has reached the city pavements of Brighton. During the course of the week, the Mockingjay symbol has slowly started appearing across the English city accompanied by the hashtag #ReadMockingjay and an arrow pointing in a certain direction.

It appears to be promotion of the third book ahead of the cinema release next month however local news source, The Argus, states that following the arrows could lead fans to a chance of winning tickets to the UK Premiere in London. We have no idea if this true but we’ll find out and confirm the source of the mysterious mockingjays. All Brightonians, feel free to go on the #ReadMockingjay hunt and tell us what you find at the end. 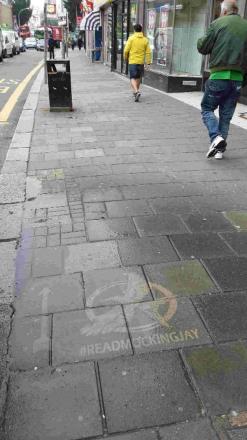 UPDATE: Waterstones Nottingham tweeted the below picture of a graffitied pavement in their city. More than likely this is a joint promtional tool for the 3rd book, the new film and the new UK Propaganda editions of the novels released today:

HUNGER GAMES FANS: Things are afoot. The rebellion is beginning, and it starts with CLEAN PAVEMENTS. #ReadMockingjay pic.twitter.com/a1ExdsjFx0

WIN! Follow us & tweet #ReadMockingjay and you could win 1 of 5 snazzy Hunger Games book sets! Ends 23.59 on Friday. pic.twitter.com/ZomgFAPfS8