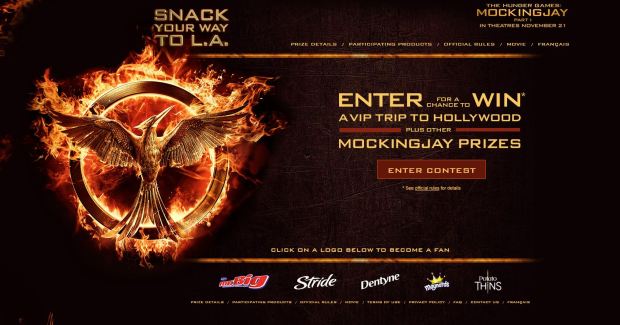 Attention Canadians: You can win a trip for two to The Hunger Games: Mockingjay Part 1 premiere in LA! (Yes, even those of you from Quebec are eligible.)

GRAND PRIZE
One (1) grand prize (the “Grand Prize”) available to be won consisting of one (1) VIP trip for two (2) to Los Angeles, California, including roundtrip coach-class air transportation for two (2) from the international airport closest to winner’s residence (as determined by Sponsor at its sole discretion) to Los Angeles, California; three (3) consecutive nights’ accommodations at a hotel determined by Sponsor at its sole discretion (based on one (1) standard room with double occupancy); return ground transportation between winner’s residence and international airport closest to winner’s residence, as noted above; return ground transportation between airport in Los Angeles and hotel; Two (2) tickets to the premiere screening of “The Hunger Games: Mockingjay Part 1” (the “Event”); and $1,000 CAD spending money for the winner (to be awarded in the form of a cheque). Total approximate retail value (“ARV”) of the Grand Prize: $3,500, based on sample Toronto departure.

SECONDARY PRIZE
One (1) secondary prize (the “Secondary Prize”) available to be won consisting of two (2) cinema gift cards redeemable for free entry at cinemas to motion pictures for one (1) year (subject to laws and regulations concerning gift cards in winner’s jurisdiction of residence), such cinemas subject to determination based on availability. Total ARV of Secondary Prize: $1,300.

To win, you have to buy (or go in to the store and take a picture of) a certain snack or chewing gum and enter its UPC code here.

Read the Official Rules for more information and to get a complete list of which snacks you need to enter.

Thanks to our friends at Quarter Quell for the tip!

It's giveaway time! Here's your chance to win a ticket for two to the Hunger Games Fan Marathon Screening taking place in Los Angeles on March 20th. This is where you can participate!