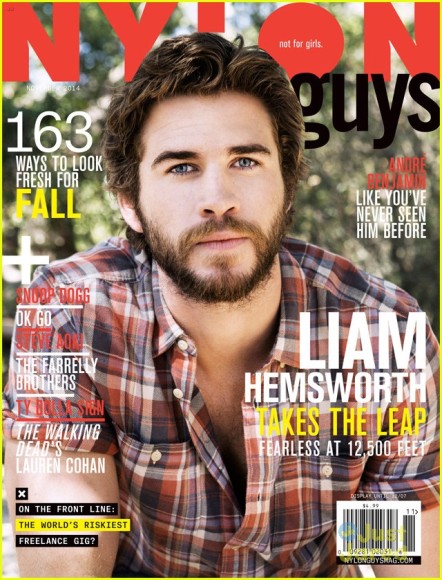 Liam Hemsworth graces the October/November edition of Nylon Magazine, where he talks about his childhood in Australia and working with the Hunger Games cast.

Hemsworth says growing up in Australia he and his brothers (actors Chris and Luke) played with rifles, bows and arrows handmade by their grandfather. “For some reason, my grandpa thought they would be good to give to us—we would just do stupid shit out in the bush.” Says Hemsworth, the youngest, “I think everyone agrees that I was the naughtiest as a kid. My uncles used to call me ‘Devil Child,’ or ‘Triple’ for triple six. They used to tell my brother Chris that they were going to get the demons out of him because he was also a little crazy. But to me, they’d just be like, ‘You’re too far gone. There’s no exorcising you anymore.’”

Of his Hunger Games castmates, Hemsworth says: “I’ve been friends with all these people for so many years now…. I’m so lucky to have Jennifer [Lawrence] and Josh [Hutcherson] and Woody [Harrelson] and all these other great people. We’ve created really strong bonds.” And of the fun on the set: “It’s like high school because we’ll mess around for half the day and then we’ll do a little bit of work. Everyone’s goofing around and trying to mess each other up.”

Director Francis Lawrence and co-star Woody Harrelson are also quoted in the interview:

Adds The Hunger Games (Mockingjay –Part 1) director, Francis Lawrence, “Jen was hands down the biggest joker, but any time you had Liam in a scene with some combination of Jen, Josh, or Woody, there were going to be a lot of laughs.”

And says Harrelson, “My rapport with Jen and Josh: We got on like a house fire. It was a longer process to get to know Liam. But it was only a matter of time before we were cracking each other up in scenes. We had to not look at each other or we’d mess up the shot.”

You can read more of the article here.

Erin is a 34-year-old housewife who spends her time reading, writing, playing Blizzard games, and obsessing over The Hunger Games.
@www.twitter.com/neinora
Previous New Stills From ‘The Hunger Games: Mockingjay Part 1’ Include District 13 And Buttercup
Next ‘The Hunger Games: Catching Fire’ Coming to Amazon Prime on October 22nd