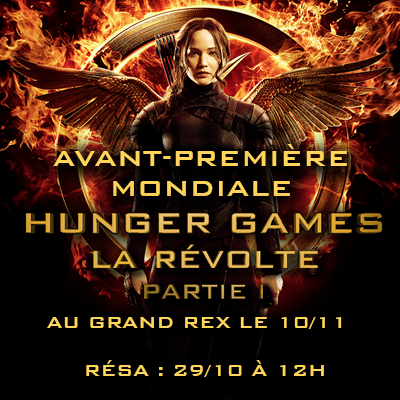 Le Grand Rex‘s Facebook page has announced that a French premiere of The Hunger Games: Mockingjay Part 1 will take place on November 10th. As, we’re sure, all of you are aware the World Premiere of the movie takes place in London on the same night. Therefore any cast and crew attendance is highly unlikely, definitely count out the main stars, Francis and Nina. According to The Hunger Games France, the red carpet arrivals in London should be broadcast at the screening.

Despite the absence of Jennifer, Josh and Liam, the screening does take place on the same day as the World Premiere, 10 days before it opens nationwide in France. Tickets go on sale for the event on October 29th.

Thanks to The Hunger Games France!