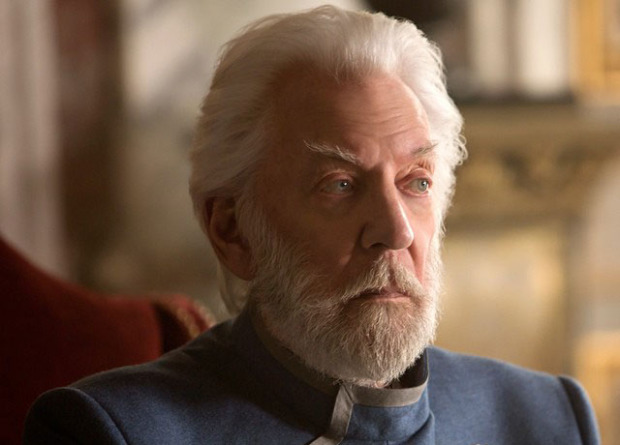 In a fascinating new interview that will be published in the November print edition of Variety, actor Donald Sutherland gives us his opinion on what President Snow really thinks about his adversary Katniss Everdeen.

“She wows him,” he said. “She delights and amuses him because he knows more than anything she has a particular kind of genius he’s been looking for all his life.” We’ve known ever since the first Hunger Games that Sutherland has a deep understanding of the character of Coriolanus Snow, so it’s amazing to hear him give this type of analysis about their relationship.

Sutherland also related a rather amusing story about when he was about to start work on the first film. “I was at my dermatologist, and she asked me what I was doing next,” Sutherland recalls. “I told her I was about to do something called ‘The Hunger Games.’ She gasped and started calling everyone into the room, and they all came running. That was my first inkling it might be something big.”

Sutherland had an…interesting opinion of his actions as the leader of Panem. “He doesn’t kill anyone…unless it’s essential,” he points out. “He maintains a tight control, but he’s not a war criminal like so many presidents and people throughout the world who have killed millions.”

A 40-year-old mom to three living in Honolulu, Hawaii, Crystal Watanabe is a full-time freelance fiction editor.
@pikko
Previous Josh Hutcherson to Appear on The Tonight Show 11/13
Next Lionsgate UK to Host Twitter Q&A with Natalie Dormer and Sam Claflin on 11/10