BBC Radio 1 Has Colorful Interview with Liam, Jennifer, and Josh 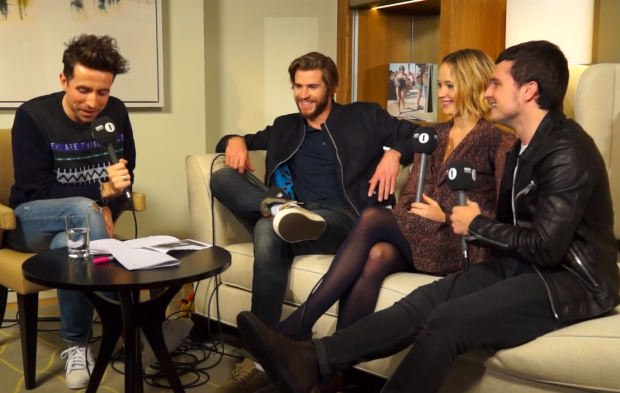 BBC Radio 1 has a very eclectic and lively conversation with Liam, Jennifer, and Josh, who are having too much fun as usual. Josh and Jennifer talk about getting over their recent sickness, and Jennifer does a great Liam impersonation poking fun at his “mind over matter” strategy to stay healthy.

When asked about filming Mockingjay, Jennifer says, “It’s alwas exciting because they’re my best friends, so we always have a blast shooting these movies. And also, the story was really different–there wasn’t games this time. We’re getting deeper into the war. There’s just more to do. My character starts out very stripped down–she’s totally lost herself and has to rebuild. It was exciting.”

Surprisingly, Jennifer says her worst day on set was singing the Hanging Tree. “My biggest fear is to sing in front of people, so that day was terrible!” Liam chimes reassuringly saying, “She did a wonderful job though.”

Josh, Jennifer, and Liam all admit to not liking to watch themselves on screen. “It’s hard to step away from the fact that your face is so big.” Josh says. Jennifer adds, “I really do love these movies, but the whole time I’m watching them I’m thinking about what a troll– and how untalented and awful I am, and afterwards I’m like that was a really good movie,” she laughs saying, “T’m the worst part of the whole franchise.” Josh echoes her feelings, “I like [the movies], I just hate that I’m in them.”

Of course the fans couldn’t disagree more, but it just goes to show the vulnerability that each of their roles demands of them on screen. When talking about Peeta’s emotional state in Mockingjay, Josh says, “Peeta goes to a much darker place. He’s psychotic, and thrashes around and loses his mind some. That was a first for me–onscreen. But I do that all the time in my personal life. I’m a raging lunatic, so for me it was nice to get back to my roots,” he says, making Jennifer laugh.

And of course, with every interview, we get the golden nugget of insider info like Josh’s love for McDonalds. (See how the nugget pun fits nicely?) On the subject of food, Jennifer blurts out a story to Josh, “Remember that one time I was at your house, and we ate a like a whole pizza, and then I stopped at McDonalds and had a double quarter pounder, and then I had to come pass out in a food coma and I had a ketchup packet stuck to my ass.” As if we needed another reason to love Jennifer.

This November is the season of Thanksgiving, and we sure do have a lot of Jennifer, Josh, and Liam to be thankful for. So check out the 13 minute video. It’s worth every second.