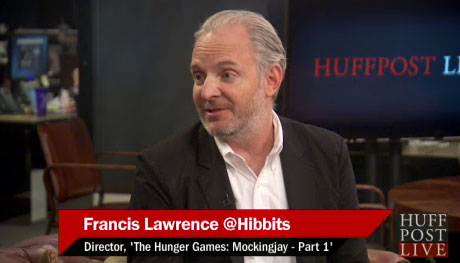 Francis Lawrence appeared on HuffPostLive today, taking questions from fans, including one from Jabberjays.net! They talked extensively about working with Philip Seymour Hoffman, how professional Jennifer Lawrence is on set, and about Francis’ previous works.

Our question was one that was also about Philip Seymour Hoffman: 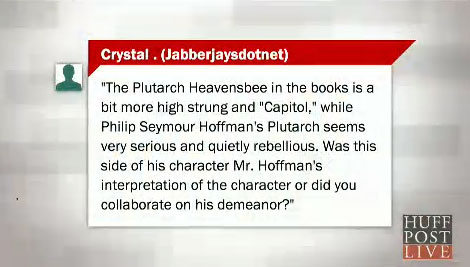 If you watch the playback, our question comes on at around the 14:00 mark. His answer, for those of you that don’t want to watch the full half hour:

Phil and I collaborated on the demeanor. You know, one of the questions…one of the things that he and I spoke about in the very beginning… he had been doing Death of a Salesman and we needed to wait for him to finish because he wasn’t really thinking about anything while he was in that play and he finished and he read the series and really fell in love with the books and the ideas of the books. And then he and I had a conversation about the character and I think his fear was being a kind of a caricature and he really wanted to find–again talking about the reality–he wanted to find the real human being in Plutarch Heavensbee. And he was also really fascinated by the idea of the two kinds of characters you would end up seeing in the series, the character you would see with President Snow in Catching Fire where Plutarch is kind of playing a role, right? That he obviously has other plans, but he’s playing an ally to Snow, and then the kind of real Plutarch that we see in Mockingjay because he’s got nothing to lose. He doesn’t have to play a role around President Coin and around Katniss. But he was really sort of looking for the true humanity of the character and that’s part of why he joined.

The cast and crew are doing a bunch of these Q&A type sessions leading up to the premiere, so be sure to submit something and maybe you’ll get something answered!