Julianne Moore On the “human quality” of President Coin in Mockingjay 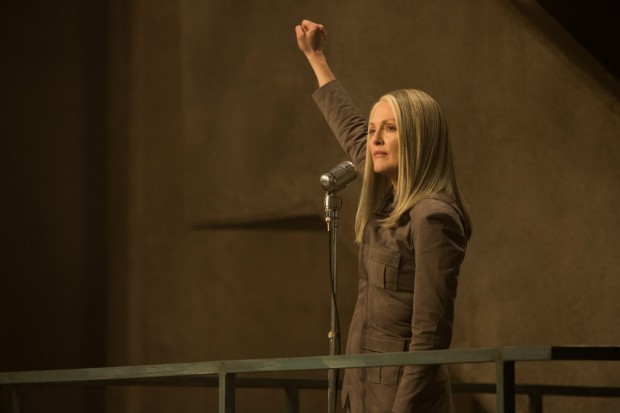 We’ve heard plenty of talk about a more “human quality” in Julianne Moore’s portrayal of President Coin and in a new interview with Radio Times, Moore sheds a little more light:

“I wanted to bring a human quality to her. In the books she’s really only represented from Katniss’ point of view. You don’t know who she is; [she’s] tremendously opaque. I wanted to give her an evolution as a human being and a political evolution as well.

“So it was interesting to me that she’d been underground all these years, that she’d lost her family, that she was a female leader, that she had lived with this kind of incredible restraint – not a lot of food. Everyone in District 13 is described as being very thin, because they haven’t had any food for years and years.

“Katniss observes that her hair is so perfect, she wonders if it’s a wig. I thought: well, there’s something to that. Someone who’s been underground that long who’s very thin, very quiet, but whose hair is that perfect – is that a clue to who she is?”

She also revealed that she is indeed wearing a wig on screen and pays tribute to the late Philip Seymour Hoffman. There is a mini spoiler at the end of the article, so don’t scroll all the way down if you’re spoiler wary!

Tash is a 28-year-old Australian currently working in communications and media. A keen WW2 history enthusiast, particularly when it comes to the airborne, Tash also enjoys gaming, car detailing and spending far too much time on the Internet.
@https://twitter.com/tashonix
Previous VIDEO: Jennifer Lawrence on The Colbert Report
Next Sam Claflin Shares Details of a Prank on Jennifer Lawrence During Mockingjay Filming

Julianne Moore confirms Jennifer Lawrence is as real and fun as she appears and we also have a hilarious video of the Oscar winner performing some of her most famous roles, from Magnolia to The Big Lebowski, in Times Square in exchange for tips with Billy on the Street.