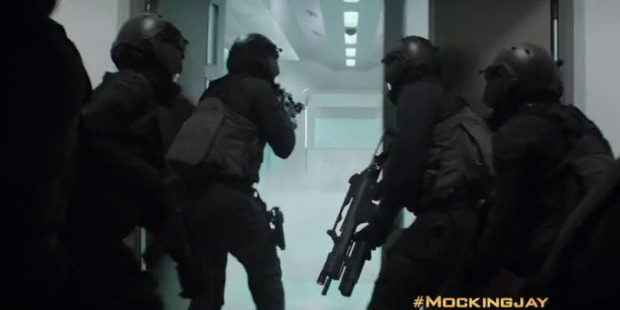 I strongly suggest saving or bookmarking this story and coming back to it after you’ve seen The Hunger Games: Mockingjay Part 1. Francis Lawrence details some of the political imagery and blatant allegory of our times that are prevalent in pivotal scenes in the penultimate story of Panem (that was a lot of words beginning with P!). So you have been warned.

“One of the big themes—if not the big theme—of Mockingjay – Part 1 is the battle of the airwaves,” Lawrence tells The Daily Beast. “I don’t think teenagers really understand the role propaganda has in our lives in terms of politics, advertising, and the general manipulation of imagery.”

“I think there are parallels with ISIS,” says Lawrence. “We made this film before the videos were released, so it’s a chilling reminder of what can happen in the real world. Suzanne Collins wrote a series of books specifically about the consequences of war, and one of the facets we get to explore in this movie is the use of propaganda in war, and the manipulation of imagery and people in the use of propaganda. Unfortunately, this kind of thing has been happening for a really long time. Now, due to technology, it reaches people in a faster, more immediate way.”

“In the book, the rescue is obviously very important but since Katniss doesn’t go, she just hears about it, so it was something we had to engineer for the movie,” says Lawrence. “I was definitely inspired by Zero Dark Thirty as far as going in under cover of darkness, flying low, not being seen, and getting out really quickly.”

“That one photo down in the meeting room in the White House—absolutely,” Lawrence says of the comparison. “It was based on that general idea.”

He adds, “My goal with Mockingjay is to make people think about war—the sides of war, the consequences of it, the propaganda, and the images we’re being shown.”

Francis Lawrence tells Filmmaker of how he loved the books and the first film, how he convinced the cast to trust him for the sequels, how he directed the ensemble cast's different techniques, his thoughts on the series now that his job is complete and much more.