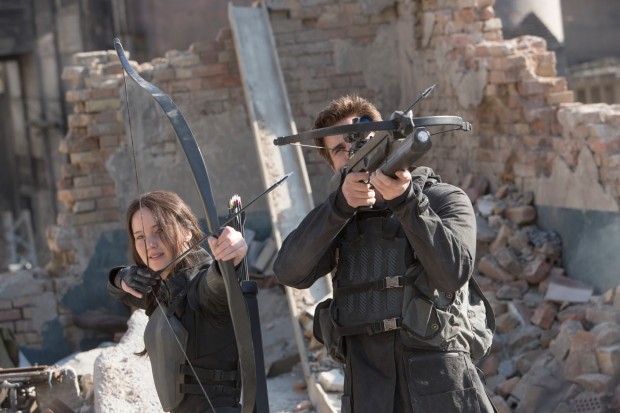 The final box office numbers for this weekend are out, and they confirm (as if there ever had been any doubt) that The Hunger Games: Mockingjay Part 1 is not only the no. 1 movie in the United States, but also the no.1 movie worldwide.

Domestically, the movie earned $121.9M, meaning it has the biggest opening weekend of 2014 (surpassing the $100M or so made by Transformers: Age of Extinction in the summer), and the 17th biggest opening weekend of all time. Unless the next big tentpole movie (The Hobbit: The Battle of the Five Armies) has a record-breaking opening weekend– which is doubtful, given the history of the two previous movies in the franchise– things are likely to stay this way.

Now, if you’ve been paying attention to the media this weekend, you might have heard that these numbers are considered “disappointing” because a) they’re 22% lower than the earnings for Catching Fire in the same period, b) they’re lower than the “Part 1” adaptations of other popular YA franchises such as Harry Potter and Twilight, and c) they failed to reach Lionsgate’s official estimations, which stated the movie would make between $130M and $150M. But don’t despair, tributes: as with anything, these numbers have to be analyzed in context, and after doing so, the studio itself seems to be more than satisfied with the movie’s performance.

(For comparison, Mockingjay Part 1 did, in fact, make more money in its opening weekend than Christopher Nolan’s highly-anticipated and IMAX-boosted Interstellar has made in the three weeks since it was released).

There are many reasons why the movie could have performed under expectations, and not all of them are situations the studio can be prepared for. Lionsgate cites the “weather delay” as one, as most of the north of the United States is registering truly inclement winter weather. They also expect the film to gain steam next weekend, as Thanksgiving rolls in. Apart from these reasons, there’s also the fact that the box office intake has been lower in general in 2014: almost 5% below the 2013 earnings, and 6.4% lower than 2012’s. People just aren’t going to the movies as much this year, and that, compounded with the several feet of snow that covers a large part of the United States, could be a critical explanation for this so-called “franchise slump.” (Mind you, if Hollywood thinks $122M is bad…).

Outside the United States, however, the situation is completely different. Mockingjay Part 1 is the no. 1 movie of the weekend in virtually every foreign market, and already the no. 1 movie of the year in many of them. Not only that, but with $154.3M earned, it is also outperforming Catching Fire by 4% in the 85 international markets in which it debuted this weekend. This puts the current split at about 56% for the foreign box office and 44% domestic, which is a complete reversal of the earnings for Catching Fire‘s opening weekend.

The top markets for the film were the United Kingdom ($19.9M), Germany ($13.7M, making it the biggest opening weekend in history for German distributor Studiocanal), Mexico ($12.1M), Russia ($11.1M and a staggering 19% increase from Catching Fire‘s numbers) and France ($10.5M). Other markets such as Australia, Brazil, Italy, Spain and South Korea also performed well.

If the film continues performing at this pace in international markets, it’s expected to reach around the same (if not higher) international intake than Catching Fire did last year, particularly since there are still a few major markets where the movie hasn’t opened yet (namely China, Japan and India). This would put the expected final earnings to be around $440M. Lionsgate does not rule out the possibility that the international momentum could push the film to reach the original estimate of an $850M worldwide box office intake.

Personally, I consider this a highly successful opening weekend; I felt the estimates were too high to begin with, as this movie does not have the boost of IMAX sales as the first two had (Catching Fire made $12.6M from IMAX sales on its opening weekend), and also taking into account the aforementioned lower box office intake for the year. That said, with next weekend being Thanksgiving, less snow expected in the United States, and little to no competition for the foreseeable future, we can hope that Mockingjay Part 1 will see a smaller post-opening drop than Catching Fire did (-51%).

But it’s up to us tributes to make that happen! So tell us, have you already been to see The Hunger Games: Mockingjay Part 1? Will you take the opportunity to watch it again over the holiday weekend? International readers, how many times are you planning on watching the movie? Be sure to share your plans with us in a comment.

Carla Pinilla is a 34-year-old Chemical Engineer from Panama city, Panama. A consummate fangirl, she spends her time reading, writing (mainly fanfiction), or watching way too many TV shows.
@https://twitter.com/girls_are_weird
Previous Ferguson Protesters Graffiti ‘If We Burn, You Burn With Us’ On St. Louis Arch in Missouri
Next ‘The Hanging Tree’ Breaks Into iTunes Top 5 in US