Box Office Update: ‘Mockingjay’ Part 1 is No. 1 in the World for 2nd Week in a Row 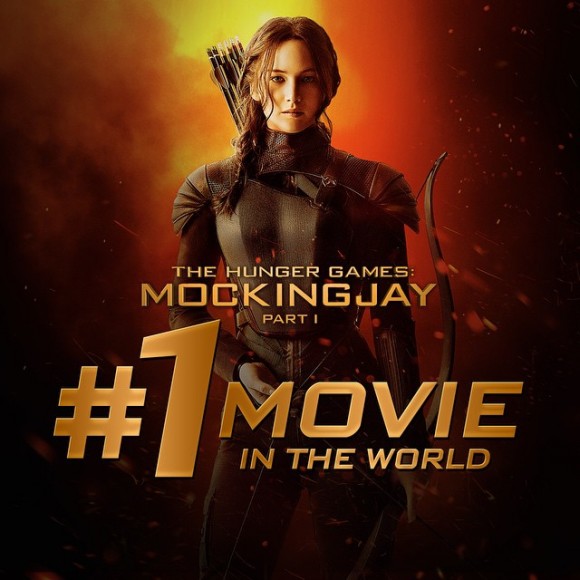 The actuals for Thanksgiving weekend are finally out, and they look just as we expected: The Hunger Games: Mockingjay Part 1 remained the #1 movie for the second week in a row, not just in the United States, but worldwide!

In the States, even with the current box office slump (Thanksgiving earnings were over 20% lower than last year, in keeping with the general trend of people not flocking to theaters in 2014), the movie truly had no competition. Newcomers Penguins of Madagascar and Horrible Bosses 2 entered the Box Office charts weakly, compared to Mockingjay‘s $57 million for the weekend. This is a 53% drop from the film’s opening weekend intake, which is pretty much identical to the 2nd week drop Catching Fire had last year.

This makes it seem like Mockingjay is going to stick to Catching Fire‘s pattern, which is good news: The Box Office Mojo analysts estimate that the movie will wrap at around $324 million, which would make it the #2 highest earner of the year after Guardians of the Galaxy, provided no surprises pop up. But even then it’d be a close call, so we can always hope for better!

Counting the entire week, Mockingjay pulled in nearly $104 million since our last box office update, pushing its domestic total to $225.7 million. This means that, in only its second weekend of release, it is already the 7th highest-grossing movie in 2014 in the United States. If Catching Fire‘s pattern holds, it should definitely overtake X-Men: Days of Future Past and Maleficent to take the #5 spot by the time the actuals roll in next week, and possibly even Transformers: Age of Extinction‘s #4 spot at $245 million.

Internationally, Mockingjay earned $67 million this weekend, which represents a 56% drop from the previous weekend. This is, again, a very similar behavior to Catching Fire‘s last year, which pushes the international total to $254.4 million. It should be noted that this is impressive not just because of the numbers themselves, but also because, while Catching Fire had China to boost up the non-US numbers, this time around the movie hasn’t opened in China yet. This makes things a little harder to predict, but also suggest an uplift in 2015 when the movie does open in the largest Asian markets. Needless to say the international box office has been stellar so far, so it isn’t a stretch to expect similar results than Catching Fire had.

The biggest overseas markets for the movie this weekend were the United Kingdom ($8.2M), Germany ($7M), France ($5.3M) and Australia ($5M). The domestic-foreign split did get a little bit more even (47%-53%), but this still puts the worldwide total at $480M, just a skip away from half a billion dollars, and just shy of the worldwide top 10 for the year. Still, expect us to be celebrating that milestone next week!

How many times have you watched Mockingjay Part 1 so far? Are you planning on watching it again at some point? Tell us in a comment.