Katniss is No. 7 on TIME’s List of 15 Most Influential Fictional Characters of 2014 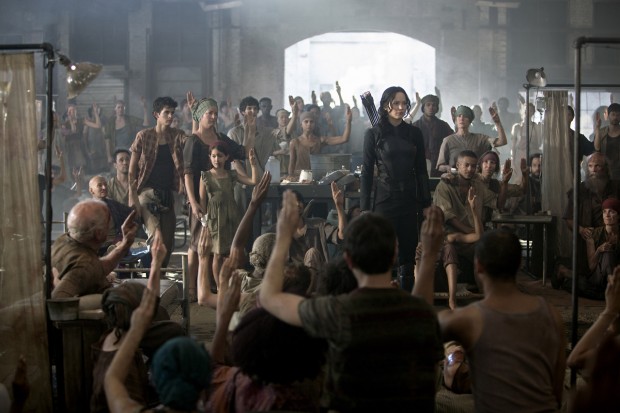 TIME Magazine has released their list of 15 most influential fictional characters of 2014, and this year the list features the likes of anthropomorphic cats, goddesses of thunder, snow queens, spoiled kings and… Kim Kardashian? But more to the point, our heroine Katniss Everdeen has taken spot #7!

It should be noted that Katniss also made the list in 2013 in the no. 3 spot, but where TIME exalted Katniss for her economic influence last time (the massive box office haul for Catching Fire as well as all the real-life products the franchise has inspired), this year they also mention how her story has influenced people all around the world to stand against oppression and tyranny:

The Hunger Games heroine (played by Jennifer Lawrence) has already secured her status as a feminist role model and a box-office powerhouse. But Katniss is more than a movie icon now: Her three-fingered salute, used in Mockingjay as a signal of rebellion against the Capitol, has become a rallying symbol among pro-democracy protesters in Thailand and Hong Kong.

In case you’ve missed the latest news items on how The Hunger Games has been inspiring political protest movements around the world, you can read up on them here: Three-fingered salute in Thailand, “You Burn With Us” Graffiti in Ferguson.

What do you think of Katniss’ placement on this list? It’s always good to see our franchise get recognized by its deep themes and real characters, Katniss most of all. I’m looking forward to seeing her on the list again in 2015! 😉

Carla Pinilla is a 34-year-old Chemical Engineer from Panama city, Panama. A consummate fangirl, she spends her time reading, writing (mainly fanfiction), or watching way too many TV shows.
@https://twitter.com/girls_are_weird
Previous Jennifer Lawrence’s ‘The Hanging Tree’ Debuts At #12 on Billboard’s Hot 100 Singles Chart
Next EDITORIAL: The Hanging Tree Muttation That Killed Our Souls