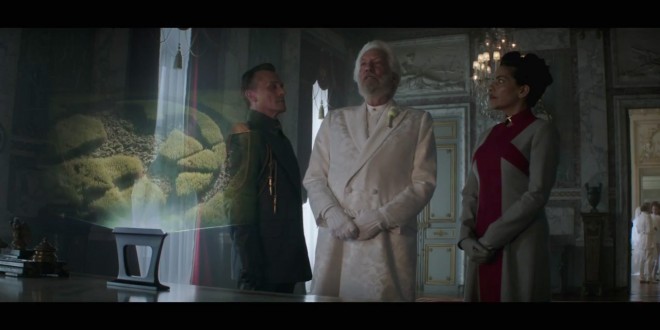 When actor Robert Knepper was announced as part of the cast for The Hunger Games: Mockingjay Part 1, fans simply scratched their heads. Who was Antonius, and what was his role in the films? Was he President Snow’s advisor? President Snow’s son? We eventually learned that he is indeed an advisor to President Snow.

But just how did Knepper get his role on Mockingjay, and why did he want to do it? Turns out, Knepper’s neighbor is Philip Messina, lead production designer for the films. “Last summer I pulled out the old ‘Hey Phil, you working on the next movie? – Yeah – Anything in it for me?’ He said ‘Dunno, let me talk to the producer.’” Messina talked to producer Nina Jacobson, and they called Knepper in for an audition.

Knepper joins the circle of adult cast members that signed on partially to thrill their children (Julianne Moore, Jeffrey Wright). “I heard it was down to me and four other guys and I just had every limb in my body crossed because I wanted to do this for my son. He was 11 at the time now 12 and it was a beautiful moment to be able to turn to him when I heard the news and say ‘Ben, guess what. I’m doing the next Hunger Games.’”

Who would have thought a guy with such a villainous resume could be so darned cute?

A 40-year-old mom to three living in Honolulu, Hawaii, Crystal Watanabe is a full-time freelance fiction editor.
@pikko
Previous EDITORIAL: The Hanging Tree Muttation That Killed Our Souls
Next PHOTOS: New Stills of Prim, Pollux and Castor in ‘Mockingjay: Part 1’

MTV talks to actor Robert Knepper and asks about his character Antonius in Mockingjay.