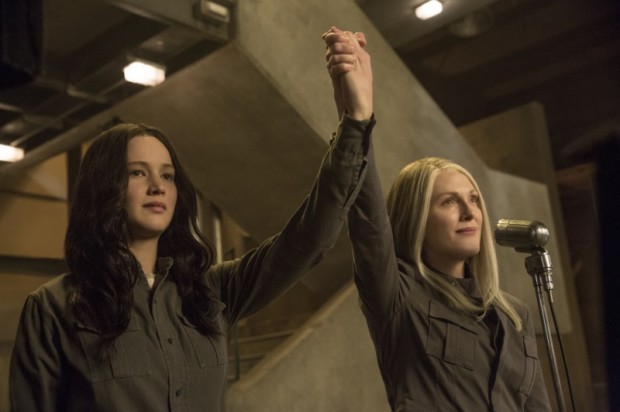 The weekend after Thanksgiving in the United States is generally considered a “slump” weekend as far as the box office is concerned, and this year it was particularly dramatic as it turned out to be the second-worst weekend of the year so far. Nonetheless, with no new wide releases in the way, The Hunger Games: Mockingjay Part 1 remained comfortable in its no. 1 spot for the third weekend in a row, as the actuals confirm.

The big news since our last box office update is definitely the fact that we crossed the $500M worldwide box office mark this past Thursday, reaching this milestone in 14 days (for comparison, Catching Fire did it in 9 days last year), and it is still going strong. Despite the slow weekend, the US box office was actually highly satisfactory: the film made $22M since Friday, which represents a 61% drop from the previous weekend. If this sounds like a huge drop to you, don’t freak out yet: it’s actually better than Catching Fire‘s third-weekend drop last year (65%). Mockingjay‘s US numbers are still a good 23% lower than Catching Fire‘s, but this is a good sign that it might improve on its predecessor’s pattern, if not the actual total.

Through the entire week, the movie made $67.4M, which pushes its domestic total to $258.2M as of Sunday. This means that not only did Mockingjay already surpass X-Men: Days of Future Past and Maleficent in this year’s top 10 list, but it also overtook Transformers: Age of Extinction, and has even earned some $400K more than The LEGO Movie. Our film is now sitting prettily as the third-highest grossing movie of 2014, and is expected to go past Captain America: The Winter Soldier to take the no. 2 spot by Tuesday. Analysts now predict that if Mockingjay sticks to Catching Fire‘s pattern from now on, it’ll wrap at around $330M– which is so close to Guardians of the Galaxy‘s $332M total intake that I can almost taste the victory! Surely US tributes can push it to overtake the Marvel movie for the no. 1 spot of the year, right?

Internationally speaking, it also retained the no. 1 spot, adding $31.6M over the weekend to push its overseas total to $302.8M; this represents a drop of around 47%, which is much better than its 2nd weekend drop. The domestic-foreign gap widened just a little bit again, to 46%-54%, but this was expected because of the post-Thanksgiving slump in the United States. The United Kingdom, Germany, Australia and France remain the biggest foreign markets for the film.

These international numbers push the worldwide total to $560.9M, which means Mockingjay has finally broken into the 2014 worldwide top 10, some $32M below Interstellar‘s current total. This will be a tougher opponent, as Interstellar‘s foreign box office intake shows no sign of slowing down; indeed, it remains huge in China (it is now the biggest 2D export ever, as well as the biggest movie ever from WB) and while it was no. 4 in the international box office this weekend, it was really close to numbers 3 and 2. The analysts, however, are optimistic that Mockingjay can match the $440M international intake of Catching Fire, precisely because it hasn’t opened in China or Japan yet.

If the estimates for its final worldwide gross are reached, our movie could end its run with $770M, which is higher than Captain America: The Winter Soldier, X-Men: Days of Future Past, Maleficent, and oh-so-close to Guardians of the Galaxy‘s $772M total at no. 2. At this point, breaking into the worldwide top 5 for the year doesn’t seem like much of a stretch at all (Catching Fire was no. 5 in 2013), although its final position will depend on how other big blockbusters such as the aforementioned Interstellar and The Hobbit: The Battle of the Five Armies end their runs.

With the $600M worldwide mark just around the corner, and things looking better and better for some fantastic spots in the yearly top-grossers lists, I think the morale of this week is: every ticket counts. It’s up to us, tributes! We can do this! Do you plan on watching Mockingjay Part 1 again in the coming weeks? I know I am.