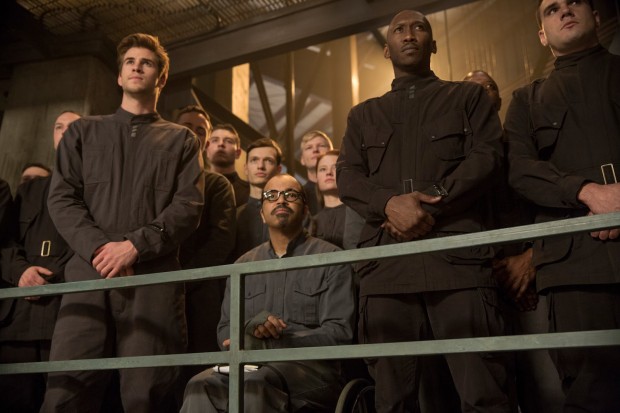 Now five weekends in, The Hunger Games: Mockingjay Part 1 continues to perform well in the box office, even in the face of a December that is shaping up to be unexpectedly slow.

You may have already heard that the movie lost its #1 spot by its fourth weekend, both in the US and internationally, coming in below Exodus: Gods and Kings and The Hobbit: The Battle of the Five Armies respectively. This was expected, however, as both are high-profile, high-budget productions; it’s important to point out that Mockingjay still remained in the top 5 for this past weekend even with three new wide releases (the aforementioned The Hobbit franchise finale, the latest Night at the Museum installment, and Annie).

In the United States, the movie earned $12.7M in its fourth weekend, and $7.9M in its fifth weekend, which represents a reduction of 42% and 38% respectively. These percentages are slightly better than Catching Fire had last year at this point, which speaks well of the prospects for the end of Mockingjay‘s run.

It should be mentioned, however, that Catching Fire showed a 15% increase during the weekend between Christmas and New Year, which pushed its totals significantly– that means, if you want Mockingjay Part 1 to truly follow Catching Fire‘s pattern and reach its maximum possible earnings by the end of its run, you better get to theaters this weekend and give it the boost it deserves!

These numbers push our film’s domestic total to $291 million, just a hop away from $300M and cementing its spot at #2 in the list of top-grossing movies for the year, above Captain America: The Winter Soldier. Analysts seem confident that the movie will wrap at around $330M, which would basically make it tie with Guardians of the Galaxy in the #1 spot for 2014. It’s also looking like it will soon break the top 50 on the all-time domestic highest-grossers (Catching Fire currently stands at #10).

Internationally, Mockingjay made $16M in its fourth weekend, and proceeds from its fifth weekend pushed its foreign total to $350.5M. This means the split remains at 45%-55% favoring the international box office, which is again a little wider of a gap than we saw in our last box office update. Once again it’s important to point out that these international totals will get a boost when the movie opens in China and Japan next year, both of them being significant foreign markets.

Adding everything together, the total box office earnings for Mockingjay Part 1 as of its fifth weekend reach $641.6M, pushing the movie up two spots in the list of 2014 top-grossing movies at #8; that means that over the course of the last two weekends, Mockingjay overtook How To Train Your Dragon 2 and Christopher Nolan’s Interstellar. Next up it’ll be facing off against Dawn of the Planet of the Apes for spot #7 with nearly $710M, which seems like a certainty. It’s also really close to breaking into the top 80 all-time worldwide highest-grossing films. This is, of course, still pending totals for blockbusters that are still in theaters, namely The Hobbit and Exodus.

One cool thing about Mockingjay doing so well is that it has now officially pushed Lionsgate’s earnings past $1 billion for the year, making it the third year in a row the studio reaches this milestone. Not bad for a studio that isn’t in Hollywood’s “top tier,” huh? That’s the power of our amazing franchise, the appeal of Suzanne Collins’ source material, and the effort and quality of our cast and crew. Feel proud, tributes!

Let’s hope next week’s box office update brings us past the $300M mark in the domestic box office, and at least a little closer to $700M worldwide. In the meantime, happy holidays to all, and remember that movie tickets make great Christmas presents! *hint hint* 😉