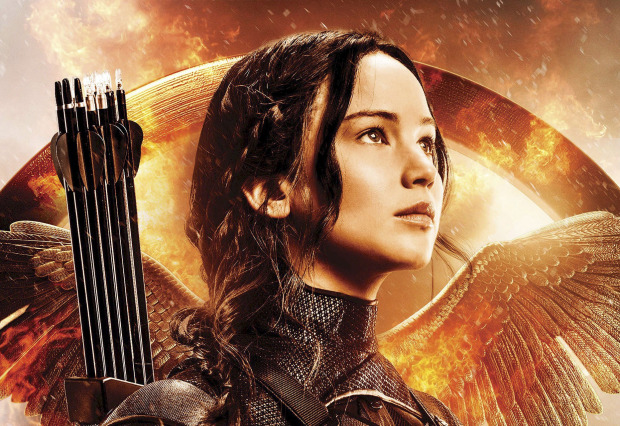 Christmas weekend is over, and with it a holiday influx into movie theaters that is always beneficial to our franchise. The Hunger Games: Mockingjay Part 1 is now slowly trickling out of theaters (it’s not on anymore where I am, boooo!), but it’s still making big bucks wherever it remains — to the point that, even over a month after its release, it’s still in the top 10 at the box office this weekend (number 6, to be exact, which is higher than many more recent releases such as Exodus: Gods and Kings, or Penguins of Madagascar).

Now that the actuals are out for this weekend, the biggest news is that our movie has finally crossed the $300M mark in the United States. Remember that I mentioned in our previous Box Office Update that Catching Fire had a 15% increase in revenue in the weekend between Christmas and New Years? Well, Mockingjay Part 1 had an increase of nearly 30% this weekend. So give yourselves a round of applause, tributes! The movie earned over $2M more than it did last weekend, with a total of $10M.

With the earnings for the full week, this puts its current domestic total at $306.7M, and is expected to be at around $320M by next weekend. With this behavior, analysts now expect the movie to make over $330M by the end of its run, surpassing the current highest grosser of 2014 in the US, which is Marvel’s Guardians of the Galaxy.

In the all-time list, Mockingjay broke into the top 50, sailing past pirates, sparkly vampires, a boy wizard and a secret agent on Her Majesty’s service to land at number 43. If the estimates prove correct, it should skip about 10 spots up by next weekend, and possibly break into the top 30 by the end of its run. (For comparison, Catching Fire is at no. 10, and The Hunger Games at no. 15).

The international box office is slowing down a bit now that the film is out of theaters in many places (boooo!), but it’s still impressive considering. This past week the movie made $12M internationally, raising its foreign total to $363M. The split is now at 46%-54%, still favoring the international box office but closing the gap a little from last week. These numbers push the film‘s worldwide total to almost $670M, which is still not high enough to move past Dawn of the Planet of the Apes to spot no. 7 on the list of top-grossing movies of 2014, but at the rate we’re going it seems like a certainty.

With the movie not opening in China until February, the worldwide totals are a bit uncertain at the moment, but analysts expect it to make between $750M and $800M by the end of its worldwide run. This would definitely put the movie past Maleficent‘s $758M total, and with some luck (fingers crossed!) maybe even past Guardians of the Galaxy‘s $773M intake. There’s a good shot at landing in the top three for the year, depending on how The Hobbit: The Battle of the Five Armies does, but the other Hobbit movies have all grossed about $1B, so we should assume the franchise closer will definitely be higher on the list. No. 3 is probably the ultimate best we can hope for, but it would also be the best for the franchise so far, as Catching Fire was no. 5 in 2013, and The Hunger Games was no. 9 in 2012.

As far as the all-time worldwide list, not only did Mockingjay break the top 80, it now stands at no. 75, past important franchise movies such as the first Pirates of the Caribbean, Thor 2 and Man of Steel. If all goes well, it could reach the top 50 by the end of its theatrical run. (Catching Fire is no. 37 at the moment and Mockingjay will not be able to reach that high, but it will definitely pass The Hunger Games at no. 72).

What do you think of these totals? Is the movie still in theaters where you are? Be sure to comment and tell us. In the meantime, we’ll be cheering for Mockingjay to reach higher and higher on those lists in the upcoming weeks. Hopefully the new year will be good for our box office numbers!

Thanks to our reader Lucas for the Forbes link.