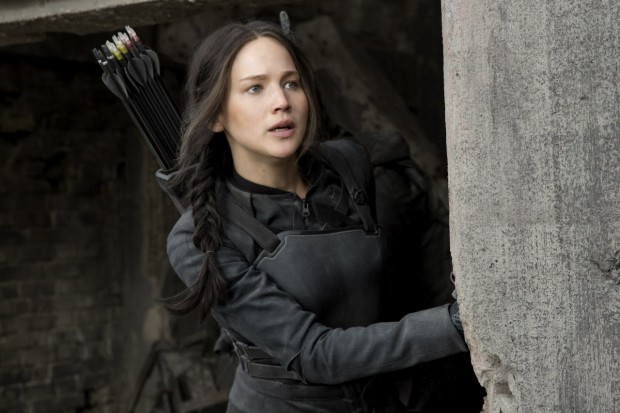 As far as box office goes, Mockingjay Part 1 (much like Katniss in the image above) is literally just about to turn a hugely important corner, leading to the $700M worldwide earnings mark, and to the no. 1 box office spot for 2014 in the United States. And I’m getting really, really excited about it.

The turn of the New Year has come and gone, as did the first weekend of 2015, and our movie continues to perform admirably. In the United States, it earned a fantastic $7.6M over the weekend, which represents a 25% drop from the previous weekend. Not only is this behavior better than Catching Fire showed at the same point last year (with a drop closer to 30%), but Mockingjay is now actually earning more than Catching Fire did in the first weekend of 2014 ($7M). This is a great sign for our totals! The film is still in the top 10 for the weekend, ranking at no. 8– definitely good for a movie already in its 7th weekend.

Adding in the rest of the week (including the holiday), the movie made over $17M since our last update. That is mindblowing! This pushes the domestic total to $323.7M. In the all-time list, the movie moved 10 spots up to land at no. 33, passing some big names such as Star Wars Episode II, the second Lord of the Rings movie, and two Iron Mans. More importantly, we’re now just $9.4M short of the total held by Guardians of the Galaxy. And do you know what that means? It means that, if Mockingjay Part 1 behaves just as Catching Fire did (or better) this coming weekend, we could be celebrating a new top-grossing movie for 2014 by the time our next box office update rolls around.

I don’t know about you guys, but I’ve been waiting for that moment since day one. Of course that has a lot to do with competitiveness, but there are plenty of reasons why Mockingjay Part 1 becoming the no. 1 movie in the United States for 2014 is a great thing, that have nothing to do with fandom rivalries. Remember how last year we cheered when we realized that Catching Fire was the first movie with a female lead to take the top spot since The Exorcist in the seventies? Well, as our reader Hansen pointed out in the comments in our last update, if Mockingjay hits no. 1, it will be the first time two movies with a female protagonist were no. 1 twice in a row since Mary Poppins/The Sound of Music in the sixties. It will also be the first time since 2006 that a movie without the help of 3D or IMAX was the highest-grossing film of the year (whoa!), the first time ever that an “action” movie with a female lead hits no. 1 twice, and the first time ever (female lead or no) that two movies from the same franchise reach the top spot in the domestic charts back-to-back.

It is also very important that Mockingjay Part 1 achieve this because, realistically speaking, Part 2 is going to have a much tougher time in 2015. With films such as Avengers: Age of Ultron and Star Wars Episode VII: The Force Awakens to compete with, it’s almost a given that Mockingjay Part 2 will not reach the no. 1 spot for the year. Therefore this is our last chance. So get on it, US tributes! You can still catch the movie in theaters! Go go go!

As far as the overseas box office goes, the movie grossed $5.3M this weekend, and added up to the totals for the full week its intake was of around $8.6M. This means the current foreign total stands at $371.6M, with the split now closer to 47%-53%, still favoring the foreign box office. The worldwide total is now $695.9M, just a skip away from $700M. The biggest markets for the film are the UK ($48M), Germany ($39M), Australia ($28.6M), France ($25.5M), Mexico ($23.6M) and Brazil ($22.5M). With The Hobbit: The Battle of the Five Armies making a killing in the international markets (as expected), Mockingjay Part 1 got pushed back down to spot no. 9 in the 2014 worldwide highest-grossers list, but even taking that into account, and with China and Japan still on the horizon, a spot in the top 5– maybe even the top 3– still seems very likely.

In the all-time worldwide top-grossing films list, Mockingjay Part 1 has now surpassed The Hunger Games and Mission: Impossible – Ghost Protocol to land on spot no. 72. It’s very possible that by this time next week it’ll have broken into the top 70. If the current estimates are reached (somewhere between $750M and $800M last time we heard), we could even be looking at a top 50 movie by the end of its run.

So what do you think of these news? Are you freaking out yet?! All I can say is that as soon as we pass Guardians of the Galaxy (both in the US and worldwide), I’m throwing a party. And you’re all invited! So keep your fingers crossed for next week, everyone. 😉