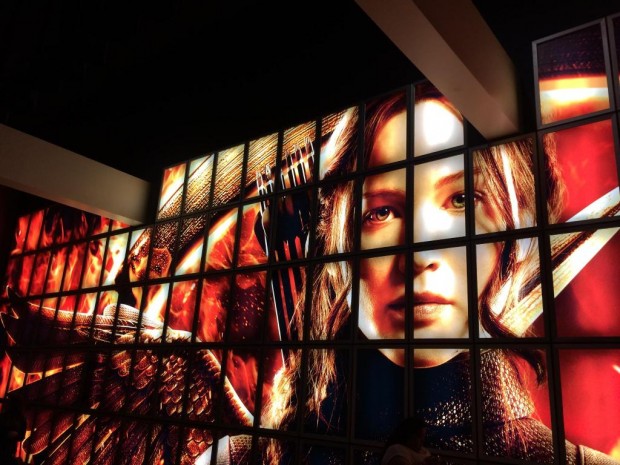 If you’ve been following the box office for The Hunger Games: Mockingjay Part 1 like I have, you know that one of the biggest opportunities for the film’s international numbers is the Chinese market, but the movie hasn’t opened in China yet and after a rather abrupt change of plans in November, details regarding release in the Asian country were vague.

This week, Lionsgate announced via press release that the movie will open in China on Sunday, February 8th, most likely to take advantage of the Chinese New Year. This will be the largest opening for the franchise in the Asian country, playing in over 4000 theaters. Great news for Chinese tributes! But that’s not the most surprising detail revealed in the press release: when the movie opens in China, it will also release in 3D.

It should be noted that this is the first time in the entire history of the franchise that a film is released in 3D. In fact, the producers and directors have been quite adamant that 3D would go against the spirit of the series, in the sense that they want to avoid glorifying violence.

Personally, I don’t like the idea of a 3D release for this franchise, but I’m inclined to believe it’s a final push on Lionsgate’s part to pass Guardians of the Galaxy‘s worldwide box office intake and ensure a spot in the top 3 for 2014. If that’s the case, it could prove an effective move. What do you think about this news? Tell us in a comment.

You can read the excerpt from the press release below. Thanks to The Fandom for tipping us off to this!

SANTA MONICA, Calif. and BEIJING, Jan. 6, 2015 /PRNewswire/ — Continuing its march across the globe, the latest installment of Lionsgate’s (NYSE: LGF) global blockbuster Hunger Games franchise, The Hunger Games: Mockingjay – Part 1, will be released in China on February 8, it was announced today by Lionsgate Motion Picture Group Co-Chairs Patrick Wachsberger and Rob Friedman.  The film, imported to China by China Film Group and jointly distributed by China Film Group, Huaxia Film Distribution and Lionsgate’sBeijing-based promotional partner Talent International Film Co. Ltd., will debut in over 4,000 theatres across the country, marking the biggest Hunger Games rollout to date in China and the first installment to be released in 3D.

Mockingjay – Part 1 has already achieved the biggest opening weekend of 2014 in North America ($121.9 million) and the third-biggest five-day Thanksgiving weekend of all time ($82.7 million) on its way to a worldwide box office of $700 million and counting. The film has already grossed approximately $325 million domestically and approximately $375 million internationally.  The first three installments of The Hunger Games franchise have already grossed more than $2.2 billion at the global box office, with The Hunger Games: Catching Fire becoming the 10th highest-grossing domestic release of all time.

“Mockingjay – Part 1 continues The Hunger Games franchise’s evolution into a truly global phenomenon, and we’re delighted to extend our partnership with Talent International and China Film Group for a February 8th Chinese release that promises to be one of the highlights of the film’s international rollout,” said Wachsberger and Friedman. “With the widest Hunger Games opening ever in China and the first Hunger Games film to launch in 3D, Mockingjay is positioned to become a major motion picture event in one of our largest and fastest-growing territories.”

As part of the film’s Chinese launch, Jennifer Lawrence has recorded a special greeting for The Hunger Games fans inChina and a new Chinese trailer has captivated audiences with its nonstop action, dazzling visual effects and epic scope.

Carla Pinilla is a 34-year-old Chemical Engineer from Panama city, Panama. A consummate fangirl, she spends her time reading, writing (mainly fanfiction), or watching way too many TV shows.
@https://twitter.com/girls_are_weird
Previous Jennifer Lawrence Wins Big at the 2015 People’s Choice Awards
Next Josh Hutcherson To Appear As Guest Judge on Face Off