Box Office Update: Mockingjay Part 1 Is the Highest-Grossing 2014 Movie in the USA 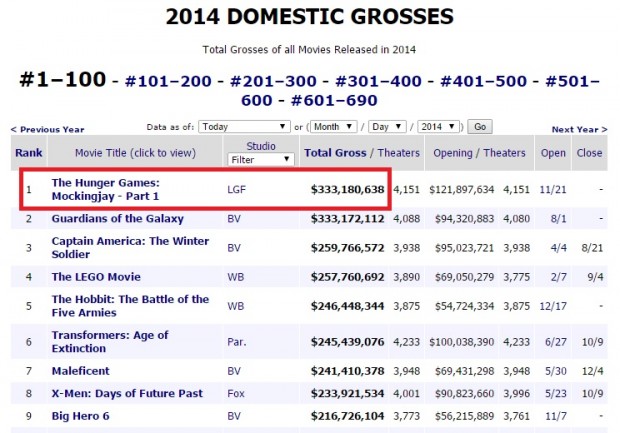 WE DID IT, TRIBUTES! The Hunger Games: Mockingjay Part 1 is the highest-grossing 2014 movie in the United States!

How does it feel to know that our franchise has reached the top of the box office charts in the USA two years in a row? This is a massive triumph not only for the studio and the fandom, but also for female-led films, young-adult adaptations, non-3D movies, and for the idea that lucrative blockbusters aren’t just spectacle, but they can also inspire ramifications in the real world. What do you think?

Since our last box office update two weeks ago, Mockingjay has added almost $10M to its total, including $2.2M over  the 4-day MLK weekend, reaching $333.2M in the domestic box office. This pushed it just slightly past Marvel’s Guardians of the Galaxy for the no. 1 spot in the 2014 charts, but with a few weeks to go in theaters still, and making over $1M per weekend in the past couple of weeks, there’s still time for that difference to increase.

(For comparison, Catching Fire remained in theaters until the end of March, well after the DVD release, making over $60K even in its last weekend).

This total also puts Mockingjay in the no. 31 spot in the list of all-time domestic highest-grossers. It seems very plausible now for it to break into the top 30, as its nearest competitor, Tim Burton’s Alice in Wonderland, grossed $334.1M. It won’t reach Catching Fire at no. 10 or The Hunger Games at no. 15, but it has already passed several box office giants such as most of the Harry Potter films (all but the last one), several Star Wars films, and the first Transformers movie.

On the international front things have been a little slower, since the movie is mostly out of theaters now outside the US and Canada. Over the last two weeks, the movie made $7M, pushing the foreign box office to $378.7M, and the worldwide total to $711.9M. The split remains 47%-53% favoring the overseas markets, though with China still pending, the gap is expected to widen.

In the worldwide box office chart for 2014, Mockingjay surpassed Dawn of the Planet of the Apes and The Amazing Spider-Man 2 to land in the no. 7 spot. It’s less than $3M away from its nearest competitor (Captain America: The Winter Soldier), so hitting no. 6 is pretty much a certainty. It remains to be seen whether it can reach higher than that; with the news that China will get the film in 3D, I’m keeping my fingers crossed for a top 3 spot.

In the all-time worldwide highest-grossers list, it went up about 5 spots since our last update to land at no. 67, knocking down the first Transformers movie and the second Twilight film. If it surpasses Captain America 2, it will hit the top 65. We’ll wait and see how far China can push it, but it’s looking like it could be much closer to the no. 50 spot than originally thought.

For the moment, though, let’s be happy with the great performance our film has demonstrated so far, and with the incredible accomplishment that is our franchise delivering the highest-grossing film of the year in the United States for two years in a row. I know I’m ecstatic; how do you feel about this news? You’re welcome to freak out with us in a comment– because we ARE freaking out, believe me! And one last thing, because I feel it bears repeating: