BREAKING: ‘Mockingjay’ Part 2 To Be Released in IMAX 3D 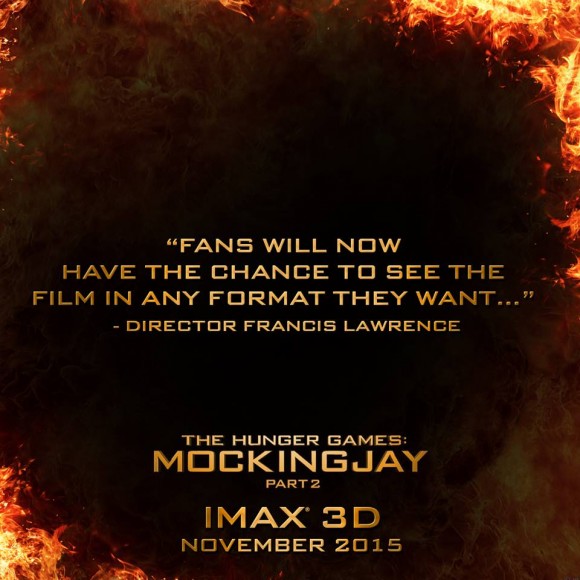 Huge news this morning, tributes! Lionsgate released a press release today announcing that upon its release on November 20th, The Hunger Games: Mockingjay Part 2 will be screened domestically in the IMAX 3D format.

“I’m thrilled Mockingjay – Part 2 will be in IMAX theaters,” said director Francis Lawrence. “Fans will now have the chance to see the film in any format they want, which is exciting; we recently saw the 3-D version of Mockingjay – Part 1 before its release in China, and the new level of immersion was really fantastic.”

“It’s exciting to be back in The Hunger Games world and once again team up with our partners at Lionsgate, director Francis Lawrence and producers Nina Jacobson and Jon Kilik on what we believe will be a thrilling, action-packed finale to this blockbuster franchise,” said Greg Foster, Senior Executive Vice President, IMAX Corp. and CEO of IMAX Entertainment. “The fan enthusiasm and cultural impact that this series has generated has been truly remarkable and we are thrilled to offer audiences the opportunity to experience the last chapter in IMAX 3D.”

This is a very surprising decision, as the movie was not filmed in IMAX/3D, and instead they have to be converted to that format. You may also remember that Francis Lawrence and Nina Jacobson have been very adamant in the past about not releasing these movies in 3D, because they don’t want them to come across as glorifying violence. However there is a precedent: Mockingjay Part 1 will play in 3D in Chinese theaters when it opens this weekend.

Our friends at QuarterQuell.org have also let us know that Lionsgate confirmed the film will also screen in regular 3D, and that these formats will also be available worldwide where applicable.

The press release also includes a summary for the movie, which I believe is more detailed than the one we had seen previously:

With the nation of Panem in a full scale war, Katniss confronts President Snow (Donald Sutherland) in the final showdown. Teamed with a group of her closest friends – including Gale (Liam Hemsworth), Finnick (Sam Claflin), and Peeta (Josh Hutcherson) – Katniss goes off on a mission with the unit from District 13 as they risk their lives to stage an assassination attempt on President Snow who has become increasingly obsessed with destroying her.  The mortal traps, enemies, and moral choices that await Katniss will challenge her more than any arena she faced in The Hunger Games.

What do you think of the idea of Mockingjay Part 2 being released in IMAX 3D? Will you go watch it in this format? Tell us in a comment!

Carla Pinilla is a 34-year-old Chemical Engineer from Panama city, Panama. A consummate fangirl, she spends her time reading, writing (mainly fanfiction), or watching way too many TV shows.
@https://twitter.com/girls_are_weird
Previous EDITORIAL: The Future of Panem
Next ‘The Hunger Games: The Exhibition’ to Premiere in New York City in July