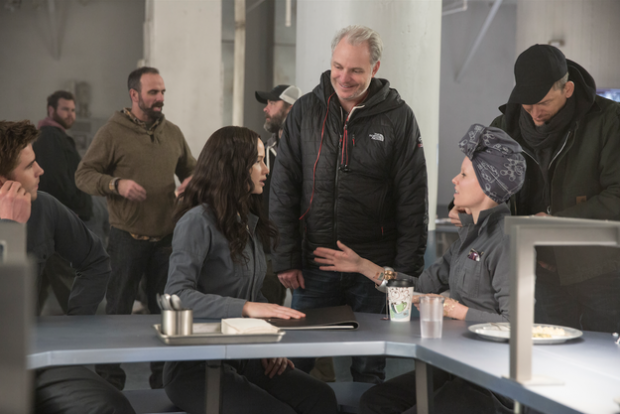 BuzzFeed has released an exclusive list of 9 behind-the-scenes tidbits we’ll be able to see in The Hunger Games: Mockingjay Part 1 DVD/Blu-ray release. Among the BTS “secrets” included in this list, we can learn about Francis and Nina’s thought process regarding the start of the movie, which is different from the one in the book:

“In the beginning of this adaptation, you’ll see that we made a jump from the book. The book opens with Katniss walking through the ruins of District 12, and we kind of only hear in her thoughts the backstory of her time in District 13. Pretty quickly we knew that wasn’t going to work and we were going to have to see Katniss getting acclimated to District 13 and meeting President Coin for the first time as opposed to jumping in the middle of the action.” —Francis Lawrence, director

“Coming off of Catching Fire we had the question of, where do want this story to begin? And we made the choice to have it begin one or two weeks after she had been lifted out of the arena.” —Nina Jacobson, producer

There’s also the very interesting detail that they actually demolished a building for District 12 (why was this not in the movie?!), more insight about writer Peter Craig’s fantastic rebellion scenes, and how the 1981 epic German war film Das Boot (“The Boat”) was the inspiration for the D13 bombing scene:

“One of the things that Peter, the writer, and I talked about a lot in this sequence was a Wolfgang Peterson movie called Das Boot. There’s a great scene where the submarine gets stuck in sink mode and goes further and further down, and while everybody panics, the captain keeps swearing that the sub can take it even though it’s passing the limits for how deep it can go. Peter and I liked the idea that Coin would show real strength here by saying, ‘You know what, we’re being bombed, but don’t send out the fleet, don’t shoot our guns — hide and let them bomb us, we can take it.’ And that it would be horrible and it would be scary, but she has such confidence in her decision and in the way District 13’s been built. And it had the same claustrophobic feeling of being in a sub 300 feet below the surface of the ocean.” —Lawrence

The article also includes 9 new behind-the-scenes stills, which you can see below. Well worth a read, just to tide you over until the DVD/BR comes out. If you’re interested, head on over to BuzzFeed and check it out, and don’t forget to comment and tell us what you think!

Carla Pinilla is a 34-year-old Chemical Engineer from Panama city, Panama. A consummate fangirl, she spends her time reading, writing (mainly fanfiction), or watching way too many TV shows.
@https://twitter.com/girls_are_weird
Previous VIDEO: Behind the Scenes With The Cast of ‘The Hunger Games: Mockingjay Part 1’
Next New Message From President Snow to Debut Tomorrow on Capitol TV