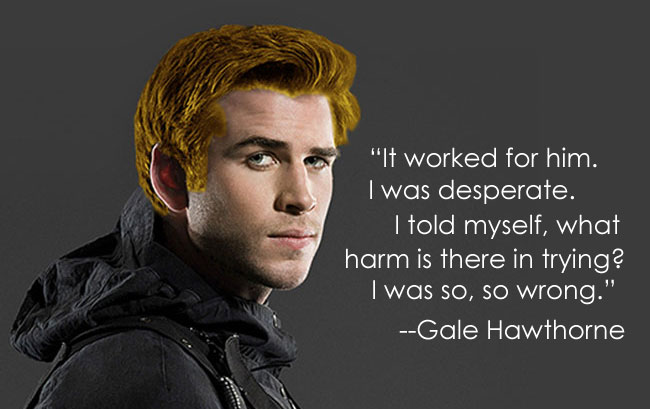 Tributes on Team Gale will no doubt be shaking their heads today as news dropped that Gale Hawthorne, hero of Star Squad 451, has been spotted in District 13 sporting what can only be described as an “Easter Yellow” dye job on his previously dark brown hair.

It is widely known that the young man from District 12 has had it rough since arriving in the hidden rebel base, with Katniss Everdeen’s love for the Boy with the Bread becoming clearer as time went on during their separation. After a harrowing rescue mission to save Peeta, Katniss’ growing affection for the boy continued, leaving Mr. Hawthorne to take the desperate measure of consulting with District 13’s incompetent prep team.

“I wasn’t around to see the utter failure the team exhibited when trying to do Katniss’ make-up, so I had no idea how bad they were at it,” said Gale. “If only I’d asked that Capitol airhead, Effie, maybe things would have turned out differently.”

Tributes are now speculating that the young blonde man spotted earlier this week, who was believed to be Peeta Mellark, was actually Gale Hawthorne.