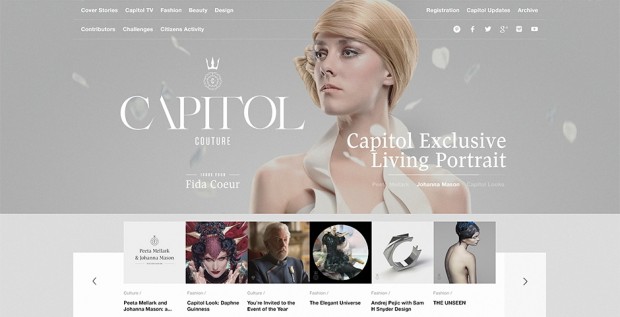 The nominees for the 19th annual Webby Awards, the biggest ceremony honoring excellence on the internet, were announced recently and The Hunger Games: Mockingjay Part 1 has a presence on the list!

Watson Design Group (also known as WatsonDG), who worked with Lionsgate in the realization of the internet portion of the Mockingjay Part 1 marketing campaign, including the creation of websites like TheCapitol.pn, Capitol Couture, The Hunger Games Exclusive and District13.co.in, has been nominated for a People’s Voice Webby Award in the category of Interactive Advertising & Media: Digital Campaigns.

According to WatsonDG, this interactive marketing campaign reached 1,589,332 average weekly visits across all its facets, involved 168 instances of original content, and accumulated 992,362 Facebook likes. If you didn’t get to check out all these websites (uh, where were you in all of 2014?), you can read up on it at WatsonDG’s website.

The cool thing about this being a People’s Voice nomination is that the winner for each category is determined by your votes! Yes, you can go straight to the Webby Awards website, sign up and vote for your favorites today. While I was not the biggest fan of the way Mockingjay Part 1 was marketed, I gotta tip my hat off to WatsonDG, because all the websites were gorgeous, the campaign was a massive undertaking, and the interactivity of it was something I’d never quite experienced before in any other fandom. As such, I really encourage you all to go and support WatsonDG by voting for them— they truly deserve it for all their hard work.

What do you think of our movie achieving this honor? Sound off in the comments.

Carla Pinilla is a 34-year-old Chemical Engineer from Panama city, Panama. A consummate fangirl, she spends her time reading, writing (mainly fanfiction), or watching way too many TV shows.
@https://twitter.com/girls_are_weird
Previous VIDEO: Willow Shields Pays Tribute to The Hunger Games on “Dancing With the Stars”
Next Lionsgate Partnering with F. Lawrence, Jacobson, Craig for ‘The Odyssey’