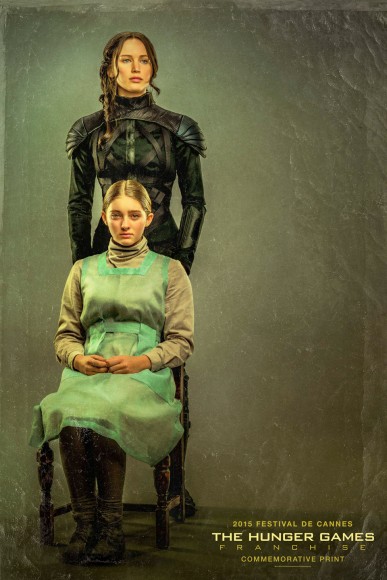 As fans, we haven’t really heard much from the Hunger Games: Mockingjay Part 2 presence at the Cannes Film Festival other than a few photos of the decorations at the Majestic hotel, but this is normal since the Festival is more aimed toward distributors than fans. However, Vanity Fair has just unveiled a treat for us: the Mockingjay Part 2 commemorative print for the festival, aptly titled “The Sister Portrait,” as it features our favorite sisters, Katniss and Prim, whose bond is at the heart of our franchise.

As you can see above, the portrait is very stylized, with a very 1940s tone, very bleak. The more artsy style fits well within the context of a film festival, and as Vanity Fair explains, it will be part of Tim Palen’s upcoming book Photographs From The Hunger Games, which comes out on June 29th and will include portraits “of the entire Hunger Games cast, from Effie Trinket in her most elaborate costumes to iconic images of Katniss that became the film’s poster art.” (You can already preorder the book at Assouline.com).

This portrait isn’t very poster-like, and we’ve already seen both of these outfits so it doesn’t really show us anything new as far as Mockingjay Part 2 is concerned, but I like the “families torn apart by war” image it evokes in my head, and I’m glad they’re giving Katniss and Prim the focus for once. It’s the first real piece of visual marketing we’ve had since the teaser poster, so hey, at least it’s something! What do you think of this one? Sound off in the comments section.

Carla Pinilla is a 34-year-old Chemical Engineer from Panama city, Panama. A consummate fangirl, she spends her time reading, writing (mainly fanfiction), or watching way too many TV shows.
@https://twitter.com/girls_are_weird
Previous UNCONFIRMED: ‘The Hunger Games: Mockingjay Part 2’ Epilogue to Film in Early June
Next Through the Pages: Mockingjay Chapter 15

As they do every December, Empire Magazine is revealing a series of entertainment-related "best of the year" lists, and today's is the 25 best movie posters of 2015, which includes Mockingjay Part 2.