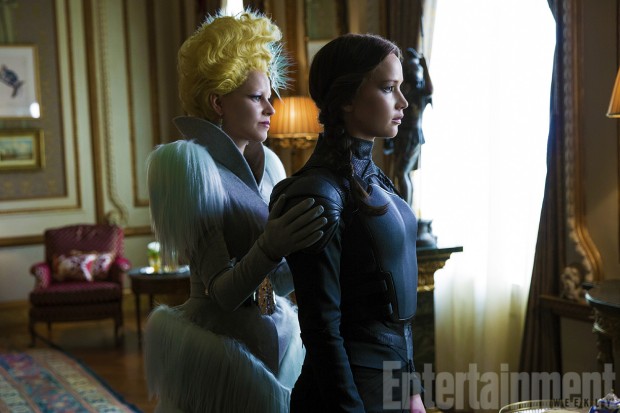 Entertainment Weekly’s Comic Con Preview issue is hitting newsstands soon, and that means many of their fandom exclusives are hitting the web this week. In the case of The Hunger Games: Mockingjay Part 2, they have just released an exclusive still featuring Effie and Katniss.

This scene will most likely be near the end of the film, when they are in the Capitol and Effie is getting Katniss prepped for Snow’s execution. We’ve already seen some of that scene in the teaser trailer, but it’s nice to have a good quality still rather than just screen caps.

What do you think of this still? Are you looking forward to this scene in the movie? Tell us in a comment. We’ve got our fingers crossed for EW to give us more Mockingjay Part 2 stuff over the coming week and through Comic Con weekend!

Update: EW spoke to Francis Lawrence about the final movie.

“There is some serious girl power in this movie,” says director Francis Lawrence, who gives all the credit to author Suzanne Collins. “She wrote it that way, and it’s been so much fun to inhabit.”

The final chapter is sure to be littered with casualties and packed with painful sacrifices. “It’s probably the most emotional of the bunch,” he says. “And I think it’s the most ­satisfying of the bunch.”