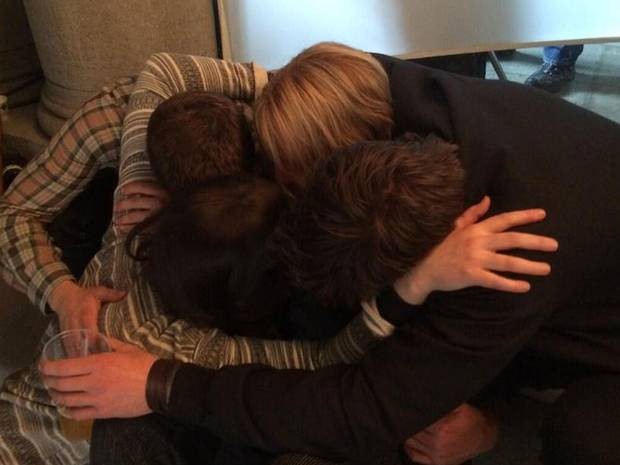 Last week we let you know that Katniss had made the cover of Australia’s FilmInk Magazine. Today, thanks to Life in District 13, we have access to a transcript of the article itself. The piece did not include any new stills from the movie, but it included some really sweet comments from the cast and director Francis Lawrence about the movie itself, each other, and the last day of filming.

Initially, Francis Lawrence talks a little about the difference between the first two movies and the last two (namely the lack of actual Hunger Games in the latter), and also the experience of filming on location:

“It’s beyond paparazzi, especially with The Hunger Games,” the director sighs. “If you shoot by a building with windows, within an hour on Instagram and Twitter, you’ll have these vine videos of us shooting filmed by people in windows. It’s crazy! You can’t do anything privately anymore, and there’s nothing that you can do about it. If you’re shooting in a public area, and not solely on sound stages, then you can’t do anything about it.”

The cast members also talk a little about Jennifer Lawrence and how down-to-earth she is despite her fame. Jennifer herself comments that she doesn’t feel like she’s changed since joining the franchise:

“Why would I? I was lucky to be a part of these movies, and I did my best to hopefully not suck and finish them and they did great,” she tells FilmInk. “But I don’t feel any ownership over them; I feel like a passenger on a lucky ride. If that ride ends, I’m okay with just going back to what I was before I signed on to The Hunger Games, and making indie films. I’m okay with disappearing if that’s what the people want.”

(I think it’s fair for me to say, in the name of the entire fandom as well as all the people who became fans outside The Hunger Games: WE DON’T WANT YOU TO DISAPPEAR, JEN!)

They also had a lot to say about the last day of filming (get your tissues ready because the feels are significant!). One particular account we hadn’t really heard before came from Francis Lawrence, who admitted that he cried not once, but twice:

“I did,” he chuckles. “Did [Jennifer] say that? Yes, I did cry, and it’s weird because I thought that I’d gotten over it. I had wept a little bit by myself earlier in the day, and I thought that I was past it. But then Guy Micheletti, our key grip – who is this big South African guy – right before we had wrapped and before we had popped open the champagne and before I had given this toast, he came up to me and he had tears pouring down his face. It just killed me! This guy was so strong, and he was just this rock, but he was crying like a baby! It just killed me!”

You can read the full article over at Life in District 13. This issue of FilmInk is now on newsstands, but you can also buy a print copy over at their website. In the meantime, be sure to tell us what you thought of this article in a comment.