Through the Pages: Mockingjay Chapter 19 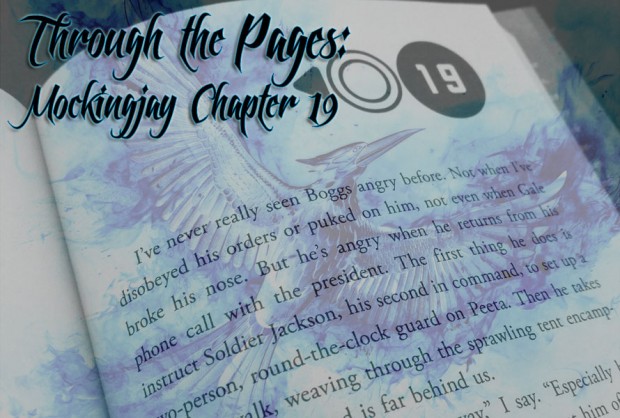 Hello everybody and welcome to the next installment of our Through the Pages series! As has become tradition around here, we will be posting two chapters up this weekend: Chapter 19 right now, and Chapter 20 tomorrow. So be sure to stay tuned for the next one.

Boggs orders Peeta to be watched 24/7, and talks to Katniss about Coin’s intentions with this move: he thinks Coin sees Katniss as a threat for her future bid as ruler of Panem when the war is over. Katniss demands to be put in the guard rotation, stating she will kill Peeta if she needs to, because he’s not Peeta anymore. Gale offers to kill him for her; he reveals he knows of her intent to desert, and insists on coming with her. Haymitch calls in and reprimands Katniss over the way she’s treating Peeta

Later that night she decides to go sit near him, and they have a conversation. Peeta reveals he’s trying to sort out his memories, but he can’t tell what’s real and what’s not. Finnick suggests he ask when he isn’t sure, and he asks Katniss about their conversation before their first Games about their favorite colors. Katniss ends up telling him some other things about himself, but starts feeling too emotional so she goes back to her tent. This later turns into the “real or not real” game.

Coin and Plutarch are not satisfied with the footage they’ve been getting, so an empty city block with a few pods in it is cordoned off for filming. In a conversation with Pollux, Peeta reveals avoxes Darius and Lavinia were imprisoned with him, and later tortured and killed just so Peeta could watch. This upsets everyone. They start filming the propo when Boggs steps on an unmarked pod, triggering a bomb that blows off his legs.

First things first: if the “you’re a painter, you’re a baker” scene doesn’t make it into the movie, I will revolt. No pressure, Francis Lawrence.

That said, this chapter reads very slow to me– lots of short bursts of conversation– so I don’t expect most of it to make it in. I believe they intend to make the storming of the Capitol a bit more dynamic so I doubt they’ll make the conversations as spaced out as it seemed here; less randomly shooting at windows and more jumps straight into action.

I think Boggs’ comments to Katniss about Peeta’s arrival will definitely earn at least a mention, because they need to establish Coin’s motivation. The inception of the Real or Not Real game, like I said, must definitely be there, as it’s the emotional center of the Capitol scenes as far as Katniss and Peeta go. Gale offering to kill Peeta, I also expect to be included– but probably one or two lines when Peeta arrives, not a full scene dedicated to it. The avoxes won’t be mentioned, although if they really want/have the time to emphasize the horrors Peeta went through, they might retool that scene into “people were tortured/killed in front of me.”

Apart from that, not much will make the cut in my opinion, until the very end when Boggs activates the pod. We’ve seen set pictures for that, so we know it’s going to happen.

Correct me if I’m wrong, but I believe that this is the chapter in which we get our first major death–and it’s one of the most gruesome in the book. I’m excited and nervous about how much will be shown in the film; obviously they’re not going to show his legs blowing off but I want them to get across, in the most effective way they can, that Boggs just lost his legs. I remember reading that for the first time and being kind of shocked; I couldn’t believe that Collins was really going there. But she does, and that is what makes this book series so powerful.

They also need to keep the whole “filming” scenario from this chapter. It’s important to show that they are not on any assassination mission because it makes Katniss’s decision later on so much more powerful. That and it wouldn’t really make sense for Coin to just send a group of teenagers out to kill Snow.

“Not bright orange. But soft. Like the sunset. At least, that’s what you told me once.” –Katniss

I remember being so angry with Katniss for much of Mockingjay for giving up on Peeta, until Haymitch’s chat turns her around. I hope this conversation makes it in, as it sets up the “real or not real” game later and begins to mend the relationship between Katniss and Peeta.

As Carla said a lot of this chapter consists of dialogue, but the “real or not real” campfire scene has to make it! And I don’t doubt that it will, though I expect the dialogue will be largely cut/changed. I’d also really like the scene between Boggs and Katniss where they discuss Coin’s motivations to make it. I’m very intrigued to see how they reveal this in Part 2, as Part 1 was very subtle about placing some mistrust of Coin in the audience.

But of course this is where the final push to Snow really starts as they push deeper into the Capital and Boggs steps back onto that fateful orange paver. Collins final book is incredibly powerful in its messaging about war, as well as the consequences and cost of war, and after three very faithful film adaptations I am looking forward to seeing how the messaging comes across in the final film. The third book has the most violent deaths of the series, however as the violence has always been tasteful so far I’m sure it’s the emotions that will hit us harder than any visuals can, and that’s the important part.

“If you’d been taken by the Capitol, and hijacked, and then tried to kill Peeta, is this the way he would be treating you?” — Haymitch

Carla Pinilla is a 34-year-old Chemical Engineer from Panama city, Panama. A consummate fangirl, she spends her time reading, writing (mainly fanfiction), or watching way too many TV shows.
@https://twitter.com/girls_are_weird
Previous POLL: What Was Your Immediate Reaction To The End of Mockingjay?
Next Panem Pop Quiz: Mockingjay Chapter 1