Through the Pages: Mockingjay Chapter 20 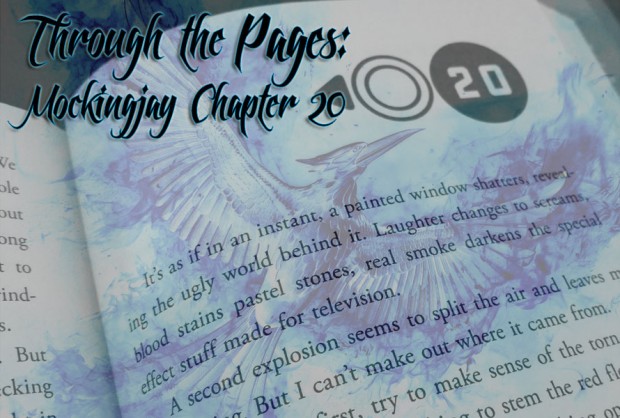 Hello everybody and welcome to the next installment of our Through the Pages series! Once again as a show of appreciation for all our commenters, we’ll be posting two chapters up today: if you haven’t yet read our predictions for Chapter 19, be sure to start there! 😀

The Squad tries to save Boggs but it’s not looking good. As he lies dying, he transfers clearance of his holo to Katniss. Suddenly a black, oily substance starts spouting from the street so they can’t go back the way they came. They start gunning at the remaining pods so they can move forward, while Katniss and Mitchell try to drag Boggs along; however, Peeta snaps and tries to kill Katniss. Mitchell manages to save her, but Peeta throws him onto a pod that activates, encasing him in a net of barbed wire. The rest of the squad subdues Peeta, and he, along with Boggs, are dragged into an empty apartment. Peeta’s locked in a closet. Boggs gives Katniss the holo; he urges her to “not trust them,” to kill Peeta, and then he dies.

They can’t stay in the apartment for too long, because setting off all those pods surely gave away their position. Jackson and Katniss argue over who should have the holo, but Katniss pretends she’s on a special secret mission from Coin to assassinate Snow. Cressida corroborates Katniss’ story, and Jackson has no choice but to believe it. She reluctantly helps Katniss with the holo, showing them a map of the area, and they set out the way they came, hoping the black tar has covered the cameras and activated the remaining pods.

When night falls they hide in another apartment. While there, the television screens turn on for an emergency broadcast in which the entire squad is declared dead. As they contemplate their next move, Peeta wakes up and declares the next step should be to kill him.

After the last chapter, which was more on the slow side of things, I’m going to keep this one short and simply say that most of this chapter is going to be included in the movie, precisely because it’s so action-packed. From the set pictures, trailers and stills, we’ve already seen many of these scenes, so they’re a sure bet. We’ve seen the black tar wave (which looks amazing!), Peeta attacking Katniss, and even Jackson showing everyone the map of the Capitol in the apartment. It’s not a stretch to think that most of the in-between will also be there; they might tone down Mitchell’s death, but I see no reason for them to take it out altogether or change his outcome.

If anything should be cut it would probably be emergency transmission at the end; they can simply have one of the characters mention that the Capitol has declared their deaths, and that saves them a minute or so. But I would not be surprised if they include everything verbatim. I’m especially looking forward to the tension between Jackson and Katniss for the holo, because I think Michelle Forbes has an incredible presence and I can’t wait to see how they handle that.

“Our next move… is to kill me.” –Peeta (although I think they’ll paraphrase it, to be honest).

I remember when I first read this chapter, I had such a great visual in my head of the apartments in the Capitol. I could just picture the group squatting in this pristine, homey Capitol-esque living room, huddled around the TV and finding out that they are all believed to be dead. It was such a powerful visual for me as a reader so I really hope that it is visualized well on screen.

Again, there is an important decision that Katniss makes in this chapter: she makes up a lie which sets up the rest of the novel. It really is a defining moment for Katniss and I can only hope that it is kept in the film. I don’t see why it wouldn’t be, but my fear has always been that they would change up things in Part 2 for no reason. And this cannot be changed.

I don’t doubt the tears will come here! I really like Mahershala Ali’s portrayal of Boggs, so his on-screen death will be devastating. What an amazing character though who finds the strength in his final moments to reinforce his belief in Katniss, and that she can help bring a better future for all, when he tells her to “do what you came to do.”

This also introduces Katniss’ lie, however the best lies always have an element of truth to them, and Katniss has absolute conviction in her own mission to kill Snow. The dynamic between Katniss and Jackson is interesting, yet another power struggle. Ultimately though they all realise that they need to move on from the apartment if they are going to survive.

From here in I think each chapter will make it pretty much verbatim, as there is a lot of action to come. We have been spoiled with set pictures (although news is dry lately!) showing us the amazing black tar, Peeta snapping and the beautiful exteriors streets in the Capital and I can’t wait to see it all on the big screen.