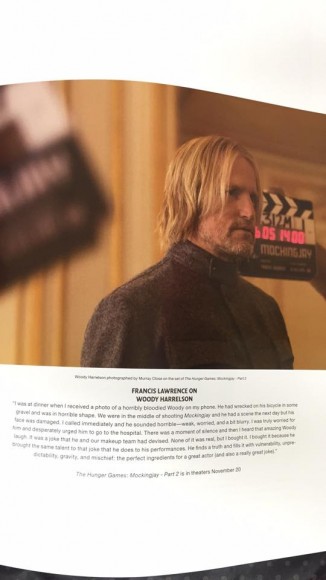 A new behind the scenes still of Woody Harrelson as Haymitch has appeared in VMAN magazine from what appears to be The Hunger Games: Mockingjay Part 2. The still is accompanied by the following quote from director, Francis Lawrence:

I was at dinner when I received a photo of a horribly bloodied Woody on my phone. He had wrecked on his bicycle in some gravel and was in horrible shape. We were in the middle of shooting Mockingjay and he had a scene the next day but his face was damaged. I called immediately and he sounded horrible – weak, worried and a bit blurry. I was truly worried for him and desperatley urged him to go to the hospital. There was a moment of silence and then I heard that amazing Woody laugh. It was a joke that he and our makeup team had devised. None of it was real but I bought it. I bought it because he brought the same talent to that joke as he does to his performances. He finds a truth and fills it with vulnerability, unpredictability, gravity and mischief: the perfect ingredients for a great actor (and also a really great joke).

And the stories of on set pranks keep coming. Gotta love Woody! On the still side of things, the costume looks very Capitol chic. And would it be crazy of us to theorise that he is in the same room that President Coin is in, in this previously released still? Ponder away in the comments when, where and what you think Haymitch is doing.

Earlier today Nina Jacobson tweeted a photo from the set of the epilogue to Mockingjay Part 2, once again proving that she is the world's biggest tease. Feelings ensued.