Through the Pages: Mockingjay Chapter 21 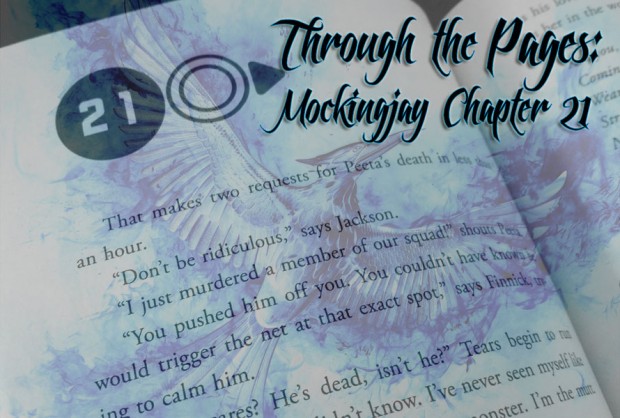 Hello everybody and welcome to the next installment of our Through the Pages series! Once again, we will be posting two chapters up this weekend: Chapter 21 right now, and chapter 22 later today. So be sure to stay tuned for the next one.

After killing Mitchell, Peeta is distraught; he argues that he’s dangerous and should be left behind for the Capitol to capture. Gale offers to kill him if he has another episode, but Peeta demands a Nightlock pill. Katniss shuts down the argument by reminding everyone that Peeta is necessary for their mission. They search the apartment and find food, although they are disgusted by the Capitol people’s hoarding habits. When they sit down to eat, Peeta hands Katniss a can of lamb stew.

The TV screen comes on with a message from President Snow, which is later interrupted by a message from President Coin. They plan their next moves, deciding the only way to move through the Capitol while staying undetected is going underground. Peeta once again attempts to stay behind, but the others won’t have it; he goes with them, with his hands still restrained.

They head down to the sewers. Pollux seems hesitant, and Castor explains that his brother had to serve his sentence by working in the sewers, not seeing the sun for over five years. Peeta says something comforting to Pollux and Katniss sees the old Peeta in that action. Pollux becomes their guide.

They stop to rest. Katniss and Pollux take guard, when Katniss sees Peeta is awake. Katniss asks him what he meant when he spoke about “shiny” memories. They talk for a bit, then Katniss tells him to go back to sleep. As he lays back down, she brushes a lock of hair from his forehead, and he doesn’t recoil. He asks her if she’s still protecting him. She tells him that’s real, because that’s what they do: they protect each other. Later on, as they’re waking the others so they can go, Katniss starts to hear a sound through the tunnels: something hissing the word “Katniss” over and over again.

I’m assuming, using context clues, that a majority of this chapter will be left intact. We know that the film includes Snow filming something while he sits at his desk; the scene can be seen in the latest trailer. Again, this is all an assumption, but I think that is him filming addressing the nation, saying that Katniss is dead. This is also when Coin cuts back in and we have the propaganda wars all over again, even if for a minute. I don’t see them leaving this out, especially now after that scene in the trailer with Snow.

One thing I’m not so sure about, though, is the nightlock. In this chapter, nightlock is discussed as a means of suicide in case any of them are captured, and Peeta says that he wants one, too. I’m still not sure how they will handle the topic of suicide in this film. I want it to be discussed–I feel that it needs to be discussed, especially towards the end. And again, how can they shy away from the topic when it was such a major plot point of the first film? We’ll see what is left in there, but I trust Nina and Francis that they will handle the topic with care.

And, finally, this is the chapter in which we enter the sewers. I’ll save what I need to say for next chapter.

“I had no idea how much I meant to her.” –Katniss

From this chapter it would be helpful to include the conflict that is going on in Peeta’s head. It’s not just that he may at any moment freak out but that he knows it, is afraid of it and feels extreme guilt over a death he has already caused. His call for his own death to protect those around him is an important and revealing element of Peeta’s character; of his true character. I think in the film it’ll be less Josh Hutcherson’s performance in that moment than about Katniss’ reaction to the request. His death is a logical and militaristic decision to ensure survival for the squad. That Katniss, the consummate survivor, cannot allow that action to take place says a lot about her and Peeta. I’m not sure they’ll include the canned lamb stew but the moment later in the chapter, in the underground, when she strokes his hair and they talk about still keeping each other alive, I’m fairly certain should make the final cut. It’s an endearing and bitter-sweet moment between the two of them.

I’m really looking forward to Snow’s address about the death of Katniss and others in her Squad. I like the tension and the brief grace period when Katniss is momentarily not being hunted. Until they come to the conclusion that she must, against overwhelming odds, still be alive. It might be a nice touch to have an interesting transition from Snow’s face to Coin’s as she breaks in, signalling that 13’s president might not be so different. Both Presidents are using Katniss as a piece in their war effort; the death of the rebellion or the reason to keep fighting, I hope the propo machine is still very much a part of the war.

I really hope they make reference to Pollux’s time as an avox in the Capitol working in the sewers. I’d like to see the panic and difficulty for him to venture down in the depths again. It could add a sense of foreboding of what awaits them down below and mirror Katniss’ own claustrophobia. I’m very confident that Francis Lawrence’s direction combined with production design, sound and score will make the Capitol underground seem eerie and produce a feeling of discomfort even before the lizard mutts are introduced.

Speaking of, I’d like them to hiss “Katniss.” It’s so disturbing. Before the mutts arrive, I wonder if we’ll have a scene of Peacekeepers discovering that Squad 451 went underground and report back to Snow. Knowing he personally released these horrors upon her, add such a brilliantly terrifying spin to the situation.

Lines I hope make it:
Katniss: “Real. Because that’s what you and I do. Protect each other.”

I think the broad strokes of this chapter will be included, but it will be really fast and not go into little details such as the lamb stew and such. A lot of it is introspection on Katniss’ part, and as such hard to translate. I don’t know that President Snow’s message will make it in; we know from the trailers that he does record some sort of message from his office at the Capitol, but I highly doubt they’ll include more than one, and I think the one that will be in the movie is the previous message that declares Katniss and the Squad dead. I think that one’s the most important, and so I don’t think they’re very likely to include this one.

So they’ll get to the apartment, argue what to do with Peeta, and set off to the sewers pretty quickly. Nightlock might be mentioned, because foreshadowing. Once they get to the sewers, that’s where things will pick up. I really hope they make at least a mention of Pollux’s punishment– mainly because Pollux taking the lead gives him more protagonism, and also because it underlines the Capitol’s cruelty. I think the conversation between Katniss and Peeta will be less about “shiny” memories and just about how he’s feeling in general, but it will be included for sure (it better be or I will kill something, no pressure Francis Lawrence); it’s a clear moment where we see how much she cares for him, and how important he is to her, and it is so important for it to be included. So important.

Last but not least, I really hope they include the mutts’ hissing. The last trailer made me a bit scared that they won’t– it seems like this scene is going to go so fast– but I’m still keeping my fingers crossed that, at least in the beginning of the scene, when the mutts still remain unseen, the hissing will be included. The mutts look incredibly scary but the hissing would add a touch of creepiness that would take that scene to a higher level. Francis knows his horror sensibilities from his I am Legend days, so I’m sure he’s going to make this scene so scary that even grown-ups will have nightmares. And I can’t wait to see it!

Peeta: “You’re still trying to protect me. Real or not real.”
Katniss: “Real. Because that’s what you and I do. Protect each other.”

Carla Pinilla is a 34-year-old Chemical Engineer from Panama city, Panama. A consummate fangirl, she spends her time reading, writing (mainly fanfiction), or watching way too many TV shows.
@https://twitter.com/girls_are_weird
Previous JabberCast Episode #25 – Nothing Can Prepare You
Next Through the Pages: Mockingjay Chapter 22