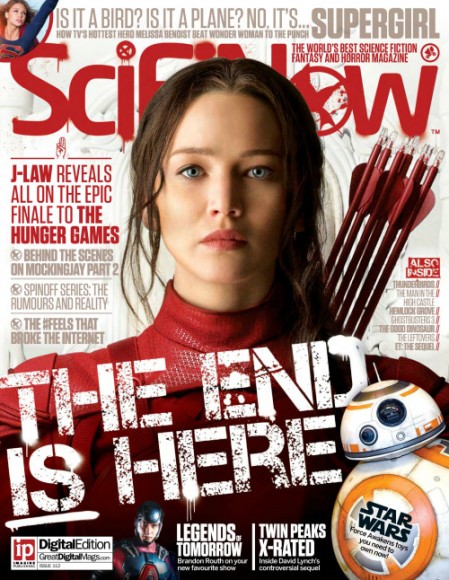 Katniss Everdeen has made another cover, this time on SciFiNow, including a nice little mockingjay touch on the o. Yet again, thanks to the lovely the-bleedinglove12 on Tumblr we have scans of the full article with a pretty neat awards for The Hunger Games series.

First up, SciFiNow takes us down the route of how Katniss changed Panem and our own world too, as Natalie Dormer highlights:

“Some men have a misconseption that female empowerment has to have a sexual [element] to it. It has to be the sexy ninja in her tight leather pants or whatever. There’s a place for that in the entertainment industry, of course there is. But Katniss Everdeen is a role model because she’s a real human being. She’s a real teenage girl with flaws and foibles and unsavoury parts of her character. She’s the reluctant heroine, the reluctant hero. And so that means it’s accessible to young women, and importantly for the guys in Hollywood who finance movies, it’s proven itself through breaking records to be incredibly economically viable. So as soon as they understand that storytelling like this is commercially viable, then hopefully we will get more roles and more characters like Katniss Everdeen.”

The article poses the question of The Hunger Games as a feminist series with Jennifer Lawrence and Natalie Dormer further chipping in to the discussion. Jennifer talks through the transformation of Katniss Everdeen from starving girl to revloutionary warrior across the four films while Nina Jacobson delves in to the media’s importance in any nation and how the person holding the control and manipulation of a story has the ultimate power. Which brings us right back to Natalie Dormer being a fan of Sci-Fi in its purest form when, like The Hunger Games, it is allegorical of the world we live in now:

“You know, you only have to look at the images from what’s going on in the news at the the moment to see displacement of refugees and people repressed by their governments and chasms between those who have and those who have not. That’s what is so strong about The Hunger Games. It explores consequences of war and all those darker human traits that it deals with in the real world.”

Liam Hemsworth goes in to more depth on where Gale’s head is right now. He talks about how winning the war is more of a focus for him than Katniss and delves in to the fundamental differences between what Gale and Katniss are prepared to do to bring the war to an end. Meanwhile, Josh Hutcherson believes Peeta empowered himself by being true and expressing his love for Katniss – something the Capitol stripped of him and signifies that it will be an arduous recovery process for the character in Part 2. Natalie speaks of Cressida’s calm demeanor in battle and Liam Hemsworth charts the growth of himself and his cast-mates over the course of going on this career defining journey. Sam Claflin describes saying goodbye to everyone before being told he had to come in for a 20 second shot the following day. He also gave his opinion on possible prequels with the story of Haymitch or Finnick winning their Games but also believes the story of the very first Games should be told and how that decision was made and accepted.

A new interview with Sam is also included where he reveals how the lizard mutts seen in the trailers were created, his broken finger accident during Catching Fire and his complete envy of everyone else with machine guns in Part 2 while he was only armed with a trident.

Additionally, SciFiNow adds the three finger salute to iconic hand gestures from sci-fi cinema including Star Trek, Guardians of the Galaxy, Spider-Man, E.T. and The Empire Strikes Back or rather, lack of a hand in Empire Strikes Back.

The article finishes with ‘The Hungries,’ compiling winners and honorary mentions in an award ceremony for the series to determine who really won The Hunger Games, including the following categories: Best Death, Best Costume, Best Hair, Most Goosebump-Inducing Moment, Most Upsetting Moment, Best Over-The-Top Performance, Best Self-Sacrifice, Best Make-Up and Best Arena Obstacle. The section also includes Worst Tribute, Worst Haircut, Most Evil Deed and Worst Person. Most Upsetting Moment pretty much sums it up:

Winner: The 74th Victory Tour visits District 11
Honourable Mentions: Cinna’s murder/ Peeta hijacking/ Victors announcement/ District 12
Catching Fire doesn’t take long to kick you in the emotional gonads. From Katniss’ heartbreaking speech to an old man’s three-fingered salute, the 75th Victory Tour to District 11 is a roller-coaster for all involved.
Our runner-ups also prompt the waterworks. Cinna’s ambiguous demise at the hands of Peacekeepers, broken and beaten Peeta post-hijacking, Katniss finding out there was to be a Victors themed Games and Katniss’ visit to a rubble-filled District 12 all make the cut. Why would you do this to us, Suzanne Collins?

Why indeed? And what fabulous upsets she has mapped out in Part 2.

SciFiNow is on newsstands now!