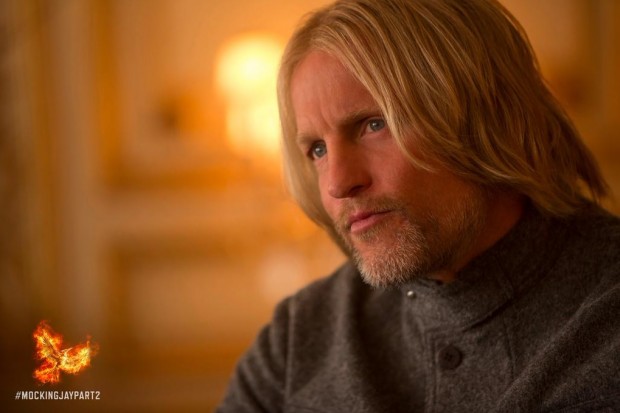 For the record, Lionsgate, I’m loving these tweet polls! The official Hunger Games Twitter is running a poll every day for fans to choose which still they would like to see released next from The Hunger Games: Mockingjay Part 2. Joining the ranks of Messalla, Finnick, Coin and Prim; fans were asked to vote for which character they would most likely take advice from, Haymitch or Boggs? With a landslide, 2nd Quarter Quell Victor and everyone’s favourite mentor Haymitch won with 90% of the vote.

We saw Haymitch in this room before in a behind the scenes still of Woody Harrelson. As you’ve undoubtedly already noted (and we continually point out again and again!) it appears to be the same room Coin and other victors Beetee, Peeta and Katniss have been , excuse me, I mean spotted in.

The next poll puts siblings Castor and Pollux head to head. Vote now!

Which brother would you follow into battle? Winning vote reveals exclusive NEW image!