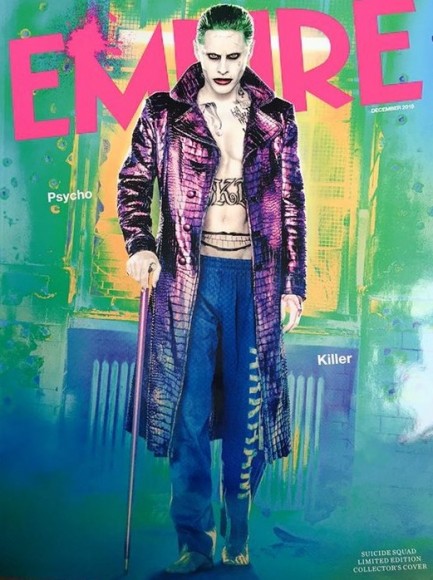 While Katniss didn’t make the cover like the epic issue last year, there is a new The Hunger Games: Mockingjay Part 2 article in Empire magazine. We also have two new stills! 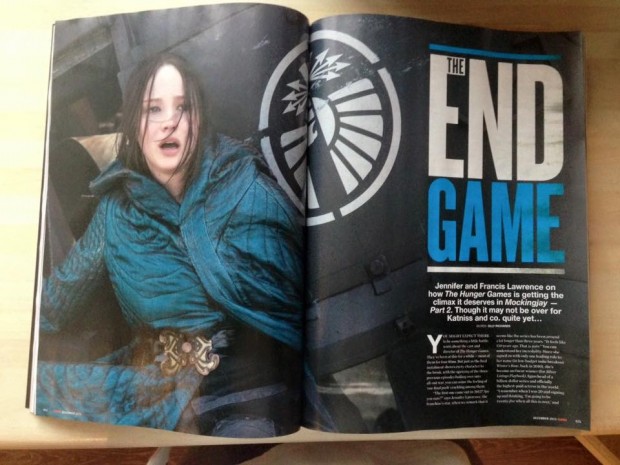 Okay so they are both slightly different versions of already released stills. We get a look at a pained Katniss in the Captiol and Gale, Peeta, Katniss, Cressida and Pollux in what we can assume is Tigris’ basement. 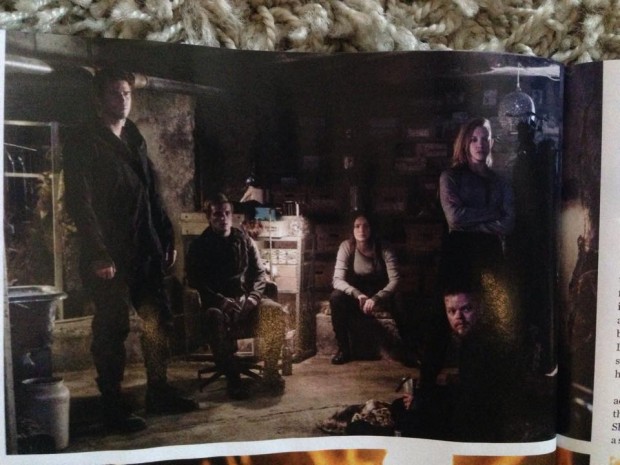 There is also a new interview with Jennifer Lawrence and Francis Lawrence. Jennifer ponders how The Hunger Games has only joined the cinematic pantheon 3 years ago, “It feels like 150 years. That is nuts.” Francis Lawrence defends the, as Empire suggests, disappointing commercial and critical Mockingjay Part 1 (how rude!):

It’s the first that’s completely tonally different. In the scope of the whole story [it’s at] a second-act low point, where the lead character is sidelined and being manipulated and living underground. There are no Games and it’s much more political and about propaganda… I think the people who got the ideas and themes and what we were doing with the movie enjoyed it. I think there was some definite ‘cynical cash-grab’ backlash toward the movie, which was a little disappointing, because I’m actually really proud of it and what it’s about… I don’t know how you do that last book in one movie. Unless you entirely go, ‘The propaganda thing isn’t interesting and Peeta didn’t need to get taken away.’ You’d have to excise all these ideas. To me, that wouldn’t be interesting and you needed that chapter. I still stand behind it.”

“The Capitol becomes the arena. The way this is ‘upped’, isn’t just making it bigger and ballsier. It’s the movies where all the ideas and rivalries and relationships crash together. So in that sense it’s the most epic and emotional of the bunch. There’s something really satisfying about the fact that this is the first in the series that ends. There’s no cliffhanger, there’s no tease. It ends.”

Jennifer Lawrence talks about the sorrow and being “pissed off” at finishing while everyone else seemed cheered. She talks about the fear of starting with a cast and crew she doesn’t know, in a city she doesn’t know and the comfort that franchise cinema brings – you get to come back to your friends every year to shoot. Empire suggests how Katniss’ experience and Jennifer’s life seemed to bleed in to one another and Francis takes it further and references the overwhelming number of times The Hunger Games has mirrored the real world:

Suzanne Collins’ stories couldn’t have picked a better time to hit the big screen. And I think we can all agree how proud we are of the impact the series has had. Empire is on newsstands this Thursday.