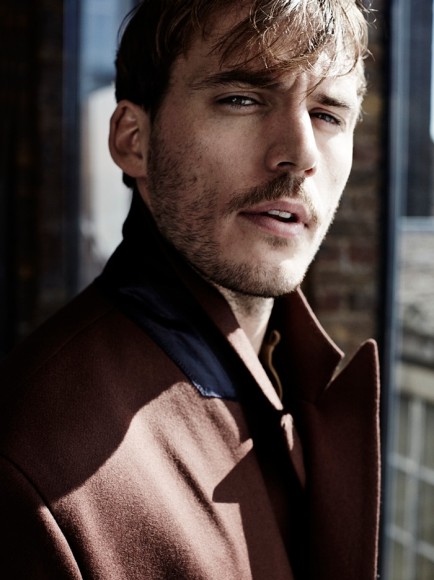 Sam Claflin spoke to The Observer recently about his quick rise from promising footballer to drama school to English heart-throb. Sam also took part in a photo-shoot for the paper, a part of the job he apparently hates (you can see his shots here).

He discussed gearing up for The Hunger Games: Mockingjay Part 2 press tour and filming the series:

“Yeah, we had a refresher screening the other day, which was helpful. Before that I couldn’t really remember who I played or what I said,” he jokes. “But I think it’s a great climax to the series. It feels like the end of an era. I was sad to see it end, but also happy… It was a bit like being on holiday with your friends. A lot of the time I was just running around Hawaii with Jen and Josh [Hutcherson] and Lynn Cohen.”

He opened up a little on the death of Philip Seymour Hoffman mid-way through filming the last installment:

“I probably shouldn’t talk about it much,” says Claflin. “But it hit us all very hard. It was very unexpected, very sad. He was not only a hero to millions, but a personal hero of mine. The way he did something with every role. It’s so upsetting that you’ll never see him in a new film.”

This segued in to a discussion about the downsides of shooting and fame:

“I’ve definitely experienced the loneliness of the job. During the first Hunger Games we were out in Atlanta for six months. I was in a hotel, and all I had for company was a box set of Friends. In a way it was helpful that I had to be in such good shape: for months my routine went gym-chicken-bed-gym-chicken-bed-work, repeat… Jen, bless her, puts up with a lot. It’s frightening to see that kind of thing, the idea that you can’t have a private life. I keep a Twitter and Instagram page because I don’t want to invite people into my world too much. It’s my way of letting the fans think they are seeing my real life, but in reality I’m pushing them away.”

And finally Claflin talked about Finnick Odair and what an unlikely candidate he was to play the District 4 Victor:

“You read the books and my character’s meant to look like a kind of Greek god. I wouldn’t have cast me: a pale, English, overweight, stubbled kid. I like a beer and a burger. I got nominated for a ‘Best topless scene’ against Zac Efron. I mean, how am I going to compete with Zac Efron?”

You can read the whole article over at The Guardian.