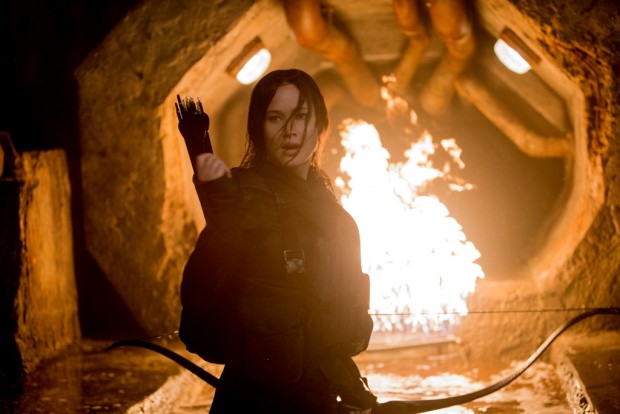 The final instalment of The Hunger Games series, Mockingjay Part 2, is emerged in complete darkness. Where in the previous film, we have seen a certain darkness building, Part 2 elevates this, providing an effective backdrop to explore the very serious and realistic effects of a country at war.

Mockingjay Part 2 opens with Katniss, our Mockingjay, having literally lost her voice; thrown into turmoil by Peeta’s condition, and fighting how to overcome her status as a pawn in Snow’s games. Where perhaps its predecessor, Mockingjay Part 1, seemed slower in action than the first two movies in the series, this movie is extremely fast paced and action-packed from the beginning, returning to its hugely entertaining roots.

What we are presented with in this movie is a very sombre look at the ongoing effects of warfare, and the young people caught in the middle of it; where our young heroine feels trapped and suffocated by a burden of death, and tries futilely to make sense of her position as leader of a war she doesn’t condone. As she prepares for her final sacrifice, we follow the journey of a young female wracked by fear and loss. In times so plagued with young adult ‘popcorn franchises’ with no real substance, Mockingjay Part 2 stands out from the crowd.

For devout fans of the series, I can see nothing that will disappoint. Where scenes have been added, and lines altered, it constantly serves to expand on an already strong narrative, and often creates even more emotional character-centric moments. Special credit should be given to screenwriters Peter Craig and Danny Strong, for such a loyal and emotional adaptation. They have provided us with perfectly balanced character arcs in this final movie, which serves to bring a much needed closure to a very heavy franchise. Their screenplay successfully connects the franchise together, referencing events from The Hunger Games and Catching Fire, to add extra sting to valuable lessons on human existence.

One sequence which must be given special attention is the scenes with the characters underground in the Capitol’s sewers. We are truly reminded of the narrative’s sci-fi roots in this portion of the movie, incorporating terrifying build up, akin to movies like Alien, and long pauses to terrify even before the dreaded and zombie-like mutts appear. A rather confusing sequence perhaps, as we struggle to keep track of the action, yet unfailingly satisfying and gruesome.

Jennifer Lawrence, once again, stuns as our heroine. Every look, every line delivery, was spot on. Katniss is a very complex character to play in this final instalment, and Lawrence takes it in her stride, rounding out a well loved character with as much depth and sincerity as possible. A stand out performance for me was from Josh Hutcherson, who manages to get across the thousands of conflicting feelings Peeta is battling in the book effortlessly. Lines are copied from the book almost verbatim, but it is the delivery and the extreme emotion packed into their performance that stands out. Both Hutcherson and Lawrence play off each other beautifully throughout. Elizabeth Banks’ final performance of Effie is a real tear-jerker, and Donald Sutherland’s Snow is particularly enthralling and chilling.

James Newton Howard’s score is almost an extra character in this movie. It brings unexpected emotional punch, referring back to our favourite musical character motifs throughout the movie (if you’re an Everlark fan especially), and incorporating his past material to bring closure to the series and its characters. It is exceptionally powerful when the film is reaching its climax, getting more oppressive and louder as the action revs up. Overall a stunning musical accompaniment.

Francis Lawrence, the film’s director, seems to have pulled this movie straight out of a fans brain, and projected it onto a screen. His vision never falters in his loyalty to adapting the much loved characters, their roles in the war, and his faithfulness to the source material. My worry about a lingering on the somewhat secondary story of the ‘love triangle’ was misplaced. In this film we see an unwavering Katniss as she tries desperately to reach the ‘real’ Peeta. Their interactions provide much of the emotional backbone of the film, giving a heartbreaking look at PTSD and our two broken victors from District 12.

The epilogue was perfect, and previous comments on its length are not justified in the slightest (not that I would have minded if it was longer!). We are given a hugely satisfactory ending to the franchise, which does not differ from the source material we all love. You will be thoroughly pleased. A bleak crescendo to a superb franchise, The Hunger Games: Mockingjay Part 2 does not disappoint.

Previous Elizabeth Banks: “Directing Is Sort of My Katniss Moment”
Next REVIEW: The Hunger Games: Mockingjay Part 2 – The Cruelty of War