NBCUniversal to Air ‘The Hunger Games: The Phenomenon’ on November 12 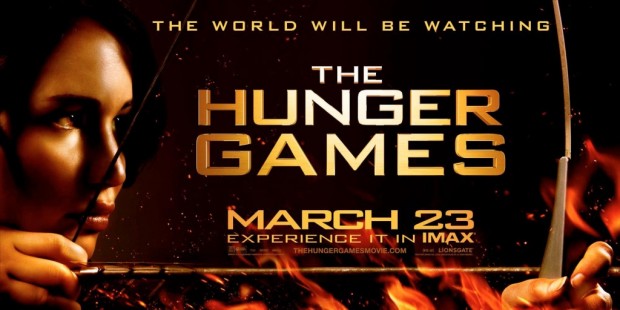 Earlier this week, we got a tip from a couple of readers that a TV special had shown up on their guides titled The Hunger Games: The Phenomenon. We inquired with Lionsgate and learned that the special will be thirteen minutes long and will air commercial free on multiple networks on November 12.

And look at that pic I dug up! Ahh, memories.

NBCUNIVERSAL TO PREMIERE WORLDWIDE EXCLUSIVE “THE HUNGER GAMES: THE PHENOMENON” SPECIAL FROM LIONSGATE

Exclusive Content to Air Commercial-Free Across NBC, Bravo, E!, Oxygen, Syfy and USA, as well as on Fandango and E! Online

New York, November 6, 2015 – In a first-of-its-kind partnership, NBCUniversal today announced that it has joined with Lionsgate to promote the launch of Lionsgate’s blockbuster film, “The Hunger Games: Mockingjay – Part 2,” premiering November 20th. Harnessing the power and reach of the NBCUniversal brands, behind-the-scenes content will air across NBC, Bravo, E!, Oxygen, Syfy and USA beginning November 10th, including an exclusive 13-minute, commercial-free, in-depth look at the epic “Hunger Games” franchise and what’s to come in the final chapter. All sneak peek video content also will live exclusively on Fandango and E! Online following the on-air debut.

“This is a terrific opportunity for ‘The Hunger Games’ fans to get an extensive sneak peek behind-the-scenes of the movie, which we know they are eagerly anticipating,” said Lara Kazandjian, Executive Vice President, Media for Theatrical Marketing, Lionsgate. “The NBCUniversal team has been very creative in working with us on this unique way to reach our fans and we are excited to partner with them on it.”

The partnership will launch during NBC’s “The Voice” on November 10th when Carson Daly and “The Hunger Games’” stars Jennifer Lawrence, Liam Hemsworth and Josh Hutcherson will announce the upcoming behind-the-scenes special and tease fans with an exclusive first-look at “The Hunger Games: The Phenomenon” on the Emmy Award-winning show.

“NBCUniversal is uniquely positioned to develop scalable opportunities for movie studios across our gigantic portfolio. And, paired with Fandango, there is simply no other place to reach these audiences and effectively drive ticket sales,” said Cherie Cohen, Senior Vice President, Portfolio Advertising Sales, NBCUniversal. “We’re excited to partner with Lionsgate to promote ‘The Hunger Games’ and serve as the exclusive destination for the film’s rabid fan base.”

On November 12th, “The Hunger Games: The Phenomenon” will run across Bravo, E! and Oxygen at 8:00pm EST followed by Syfy and USA at 11:00pm EST. Each airing will be attached to a special first-look at each network’s original show (“The Royals.” “Vanderpump Rules,” “Pretty.Strong,” “Childhood’s End” and “The Colony”).

NBCUniversal is one of the world’s leading media and entertainment companies in the development, production, and marketing of entertainment, news, and information to a global audience. NBCUniversal owns and operates a valuable portfolio of news and entertainment television networks, a premier motion picture company, significant television production operations, a leading television stations group, world-renowned theme parks, and a suite of leading Internet-based businesses. NBCUniversal is a subsidiary of Comcast Corporation. To learn more visit: www.nbcuniversal.com

A 40-year-old mom to three living in Honolulu, Hawaii, Crystal Watanabe is a full-time freelance fiction editor.
@pikko
Previous ‘Mockingjay’ Part 2 Review Watch: What the Critics Are Saying – Nov 6th
Next Through the Pages: Mockingjay Chapter 26