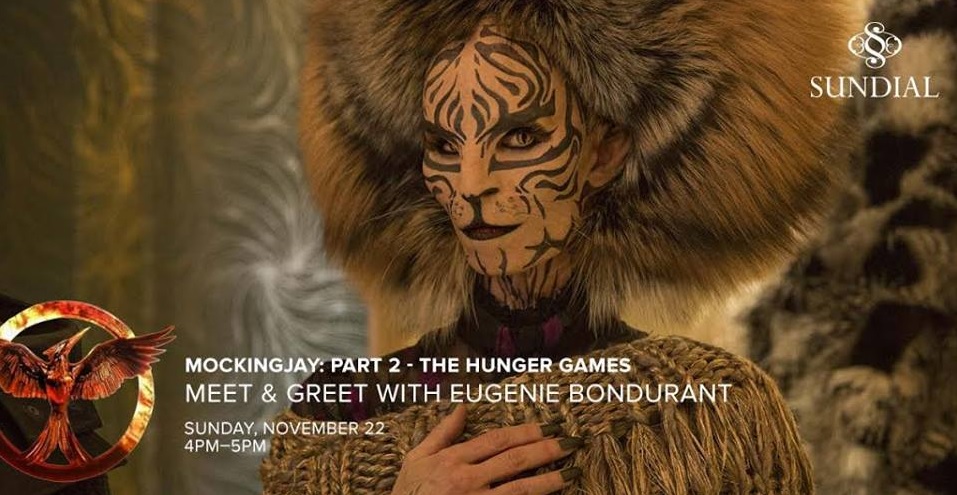 Us Weekly caught up with the lovely Eugenie Bondurant to talk about her memorable role in The Hunger Games: Mockingjay Part 2 as ex-stylist, Tigris. Adorned with the most outlandish facial alterations, the actor shared how long it took for her to transform in to the provider of Katniss’ safe haven:

“I think when we first started I sat in the chair for six and a half hours,” Bondurant, 54, tells Us of her on-screen makeover. “I had tattoos all the way down my arms and on my back and on my chest. I had wardrobe on and so it was both — tattoos and makeup on my body.” She adds: “It’s beautiful, the result is stunning.”

On working with Jennifer Lawerence, Ms Bondurant talked about her kindess and generosity with everyone on set:

“Words cannot express what a talented actress that woman is. So, that’s one thing,” Bondurant, who is “Team Katniss,” says of Lawrence. “And the second thing is, she’s incredibly gracious and fun and she makes a point to introduce herself to everyone.”

It seems as though the circle-finger-punch game that began on the set of Catching Fire did not lose any of its appeal with the cast members! You need constant vigilance on that set:

“They play this game on the set where they put their fingers in the shape of a square and if you look at it, then the person who looks at it gets punched,” Bondurant explains, laughing. “It’s hysterical. They [did] it the whole time.”

She also touched upon the absence felt after the untimely loss of Philip Seymour Hoffman during production:

“You did feel that there was…the undercurrent of this tragedy. [Losing] one of their own,” Bondurant explains to Us. “His name is actually still up on the wall and in the makeup trailer — they have all of the photos on the wall. His photo was up in the wardrobe trailer.”

You can read the full interview at Us Weekly in which Bondurant also talks about what it was like to work with Francis Lawrence and how well the set functioned.

Eugenie Bondurant will also be at a meet and greet on Sunday, November 22nd at Sundial St Pete, St. Petersberg, Florida, between 4:00pm – 5:00pm.

To salute the new holiday films that will debut this season, Sundial invites the public to meet Hollywood actress and St. Petersburg resident Eugenie Bondurant. Having just returned from the November 16th Los Angeles premiere of the new film MOCKINGJAY: PART 2 – THE HUNGER GAMES, she will sign autographs and offer a one-on-one “Meet & Greet” session outside on the Sundial red carpet. Eugenie plays the supporting role of TIGRIS in the fourth and final film of the blockbuster series starring Jennifer Lawrence.

Two of our Jabberjays, Grant and Zack, met Eugenie yesterday and can confirm how lovely she is. So make sure to hop on over there to meet her this Sunday! You can RSVP on Facebook here!