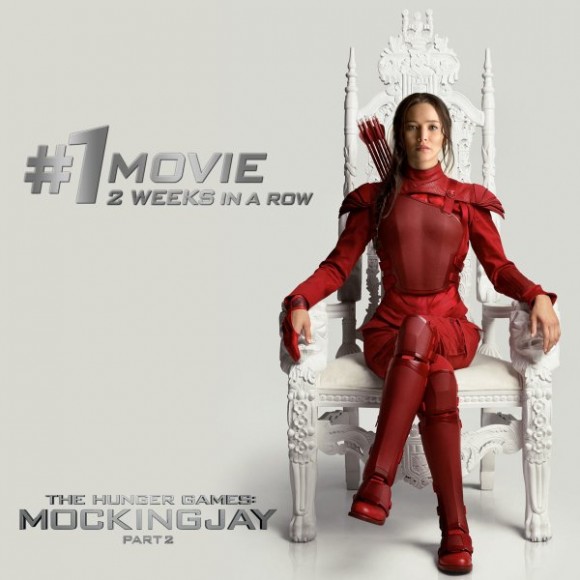 The box office actuals for last weekend are out, and none of the new movies could take The Hunger Games: Mockingjay Part 2’s spot at the top of the charts in the domestic market.

The film made nearly $76M over the five-day weekend, easily overtaking its closest competitors: Pixar’s The Good Dinosaur ($55.5M) and the Rocky spin-off Creed ($42.6M). Not only that, but out of its long weekend total, $52M came from the weekend proper (Friday/Saturday/Sunday), representing a $49.3% drop from its opening weekend. This makes Mockingjay Part 2 the only Hunger Games film that has ever had less than a 50% drop from its opening weekend to the next (Mockingjay Part 1 dropped 53% last year).

While its numbers are still lower than Mockingjay Part 1’s, the movie is showing it has better legs than its predecessors, and indeed if you compare the 10-day totals of the two Mockingjay films, Part 2 is only trailing Part 1 by around 12%, as opposed to the almost 16% difference between their opening weekends. If the film displays similar staying power over the next few weekends, it’s possible the gap will be narrower by the end of its run than most experts anticipated.

On the overseas front, the movie opened in its last international territory this weekend, which was Spain, where it made $4.1M– over $1M less than Part 1 did last year. As a whole, though, the film made around $62M over the weekend from foreign markets, pushing its overseas total to $243.7M. Apart from Spain, the top performers this past weekend were the UK with $7.8M for a $29.2M total, Germany with $7.5M for a $25.2M total, and China with $2M for a $21.8M total. The latter was affected by the release of Ridley Scott’s The Martian, which opened to over $50M in China, stealing some of the intake that would have otherwise gone to Mockingjay Part 2.

These numbers mean the movie has made $442.2M worldwide in its first 10 days, with a 45%-55% split favoring the overseas markets. This is somewhere in-between the split for Catching Fire and the one for Mockingjay Part 1.

I don’t know about you guys, but it makes me feel a lot better that Part 2 is showing some staying power, and that perhaps it can come closer to Part 1’s totals than we had initially anticipated. But as always, that staying power will depend on us fans going to watch the movie several times over while it’s in theaters. How many times have you watched it already? Tell us in a comment.

Carla Pinilla is a 34-year-old Chemical Engineer from Panama city, Panama. A consummate fangirl, she spends her time reading, writing (mainly fanfiction), or watching way too many TV shows.
@https://twitter.com/girls_are_weird
Previous Willow Shields on Working With Jennifer Lawrence, Josh Hutcherson and Saying Goodbye
Next VIDEO: Jennifer, Josh and Liam on Action, DJing and Missing Out on Visiting Korea