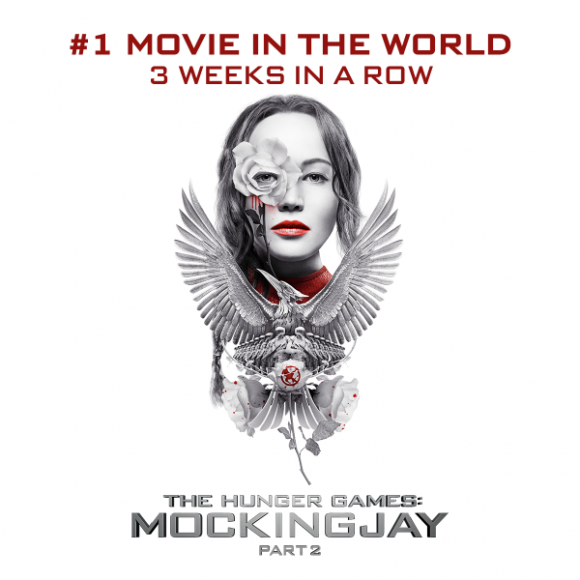 The box office actuals for this past weekend are out, and that means it’s time for us to rejoice again: The Hunger Games: Mockingjay Part 2 is the no. 1 movie in the world once again, and for the third weekend in a row!

In the domestic market, it made $18.9M, outperforming its nearest competitor (new release Krampus) by over two million dollars. This represents a drop of 63.7%, which is higher than Mockingjay Part 1 had on its third weekend last year, but not terribly higher. The film is still trailing Part 1’s 17-day total by about 12%, which is similar to what we saw last week. The current domestic total stands at $227.4M.

This might be the last weekend at the top of the charts for Mockingjay Part 2, as it’ll be facing off against Tom Hardy’s Legend on its nationwide expansion, and Chris Hemsworth’s In the Heart of the Sea in its domestic debut. Although the latter didn’t do very well on its overseas debut (it made between $17-18M for a fourth place finish at the international box office), historically we should expect MJ2 to drop between 40-45% on its fourth weekend, therefore In the Heart of the Sea should take the no. 1 spot– unless it really, really bombs. (ILU, Chris Hemsworth, but I’m going to keep my fingers crossed regardless).

Should be noted that the movie really needs to do well on these next few days… historically there’s been a slight increase in box office for the Hunger Games films during the Christmas weekend, but this year we’ll be facing off against the behemoth that is Star Wars: The Force Awakens, so the customary increase might not happen this time around. Therefore, if you’re in the US, be sure to go watch MJ2 again this weekend!

In the international front, the movie made $32.4M from 94 markets, outpacing Spectre (which just debuted in Japan this weekend and therefore saw a slight upward tick on its sales), The Good Dinosaur, and the aforementioned In the Heart of the Sea. This represents a drop of only 52.3%, which is pretty great for a third weekend. It might start dropping soon, as movies tend not to stay in theaters as long outside the US, but there’s still time for you to go and support the movie if you get the chance!

The foreign total for the movie stands at $296.8M– so close to three hundred!– and this pushed the movie past the $500M worldwide mark, to a total of $523.9M. The split is closer to 44%-56% favoring the overseas box office now, meaning foreign markets are really the ones pushing the movie forward at this point.

I must reiterate this: no matter where you are in the world, if it’s at all possible, go watch Mockingjay Part 2 again this weekend. We need to push the box office as high as humanly possible before Star Wars turns the corner. And a fourth weekend at the top wouldn’t be bad at all. 😉 Do you plan on watching the movie again while it’s still in theaters? Tell us in a comment and be sure to let us know what you think of how the numbers are looking so far.

Carla Pinilla is a 34-year-old Chemical Engineer from Panama city, Panama. A consummate fangirl, she spends her time reading, writing (mainly fanfiction), or watching way too many TV shows.
@https://twitter.com/girls_are_weird
Previous VIDEO: Hunger Games Cast and Crew on What They Like Most and Least About Each Other
Next Lionsgate Vice Chairman Talks ‘Hunger Games’ Prequels