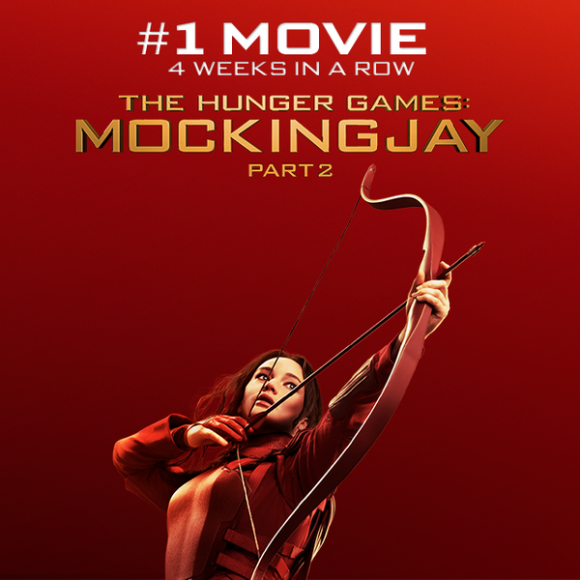 The fourth weekend of release for The Hunger Games: Mockingjay Part 2 has come and gone, and US audiences actually managed to surprise the box office analysts by pushing our movie to the no. 1 spot in the domestic charts, rather than Chris Hemsworth’s In the Heart of the Sea, which was the expected winner. Mockingjay Part 2 made $11.41M from domestic screenings, only just surpassing In The Heart of the Sea‘s $11.05M intake.

Mockingjay Part 2 is the first film in the franchise to stay at no. 1 on the domestic box office for four weeks in a row since The Hunger Games pulled that feat back in 2012. On the one hand, it’s much harder to remain at the top of the charts in November than it is in March (which is when THG premiered), so that’s one positive thing to take into account. On the other hand, while Catching Fire only stayed at the top for two weeks, and Mockingjay Part 1 for three, Part 2 is still grossing much lower than either of them, therefore this victory comes with a noticeable asterisk.

These numbers represent a 39.5% drop from the previous weekend, which is pretty good, considering Part 1 dropped about 42% in its fourth weekend last year. As of now, Mockingjay Part 2 has amassed $244.6M from the domestic markets, which means it’s about 11.6% behind Part 1’s intake in the same period of time last year. This is actually a good thing: Part 2 won’t catch Part 1, but if it continues dropping slower than Part 1 did last year, the gap between the two might be smaller than the analysts predicted initially. It’s looking very, very difficult for it to ever reach the $300M mark in the US, but hey, it’s not over till it’s over. I’m keeping my fingers crossed.

Unfortunately, our movie was not the no. 1 movie in the world for a fourth straight weekend; it was dethroned by Chinese comedy Surprise, which made $17.5M to Mockingjay Part 2’s $15.4M. This represents a drop of 52.4%, which is very similar to last weekend’s, and around average for a movie of this type.

This weekend’s international gross pushes the foreign total to $320.1M, and this means the worldwide total for Mockingjay Part 2 is now around $564.7M. The split is still widening, rounded up to a 43%-57% favoring the foreign box office. We fully expect Star Wars: The Force Awakens to completely take over this upcoming weekend, stealing both screens and ticket purchases from just about every other movie out there. Like I mentioned in my previous Box Office Update, the customary Christmas uptick is unlikely this year, but let’s hope everyone who isn’t going to watch Star Wars these next couple of weekends feels like going along with Katniss on her Capitol invasion.

But let’s talk about a number that’s way more important to us than the box office: how many times have you been to the theater to watch Mockingjay Part 2? Is the movie still playing in your area? Tell us in a comment!

The box office actuals for this past weekend are out, and that means it's time for us to rejoice again: Mockingjay Part 2 is the no. 1 movie in the world once again, and for the 3rd weekend in a row!