Crystal April 21, 2020 A Ballad of Songbirds and Snakes Leave a comment

Tributes, we have movie news! Lionsgate announced today that Francis Lawrence, director of The Hunger Games: Catching Fire and The Hunger Games: Mockingjay Parts 1 and 2, will be returning to direct a film adaptation of the upcoming Hunger Games prequel, A Ballad of Songbirds and Snakes.

Years before he becomes the president of Panem, Snow is picked to be a mentor for the 10th annual Hunger Games. Elation turns to disdain when he realizes the female tribute he’s assigned hails from District 12. Nina Jacobson, who produced all of the previous Hunger Games movies, returns to produce this prequel with Brad Simpson.

“Lionsgate has always been the cinematic home of The Hunger Games, and I’m delighted to be returning to them with this new book,” Collins, who also serves as executive producer, said in a statement. “From the beginning, they have treated the source material with great respect, honoring the thematic and narrative elements of the story, and assembling an incredible team both in front of and behind the camera. It’s such a pleasure to be reuniting with Nina, Francis, and Michael to adapt the novel to the screen, and having them share their remarkable talents, once again, with the world of Panem. I look forward to collaborating with them and all at Lionsgate as we bring The Ballad of Songbirds and Snakes to theaters worldwide.”

We’re now less than a month away from the book’s release. Are you excited? Is it time to start fan-casting yet? 🙂 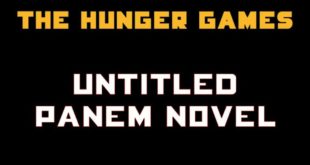 Lionsgate has announced the release date for The Ballad of Songbirds and Snakes.