The Mystery Woman of CatchingFireCasting.com 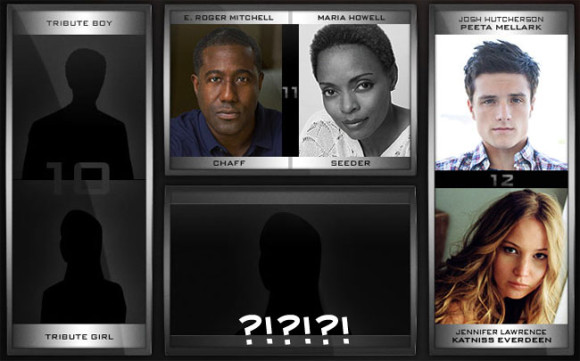 With a full week of no casting announcements, I figure this is as good a time as any to voice my opinion on the coming announcement of the Mystery Woman of CatchingFireCasting.com.

As you may or may not be aware, when Lionsgate first unveiled their casting website CatchingFireCasting.com with their announcement of Philip Seymour Hoffman, it included a lot of blank spots for the other cast members. All of them were named except for one at the bottom. This mystery person has a woman’s profile, so it’s probably safe to assume it’s a female. So who would this person be and just why would Lionsgate want to keep her name hidden?

I’ve heard quite a few theories about who it is. Hazelle Hawthorne, Greasy Sae, Annie Cresta, President Coin. But for me, the only one that makes any sense to be hidden in such a way is… Madge Undersee.

Looking back, when it was first revealed that the mayor’s daughter was going to be cut from the film, a lot of fans were completely enraged. Some even went so far to comment on this site and say that the movie would now officially be ruined because there was no Madge.

I couldn’t understand this reasoning at all. Madge was a side character and a really small one at that. Sure, she gave Katniss the mockingjay pin and therefore in a way helped to start the revolution (even though she was so naive she didn’t even know what the bird represented), but an act such as that one could technically be transferred to anyone and no one but book fans would know the difference. In the way of movies, cutting her out to save on time and back story on her character was pretty standard.

But the fallout from Madge going missing was much crazier than I had thought it would be. And maybe Lionsgate saw all that rage as well. So what backup do I have for my little theory? Well, first I’ll attempt to discount the other theories. First of all (and this is not my own observation, someone pointed it out to me), we need to pay some attention to the colors of the name bars on the casting site. 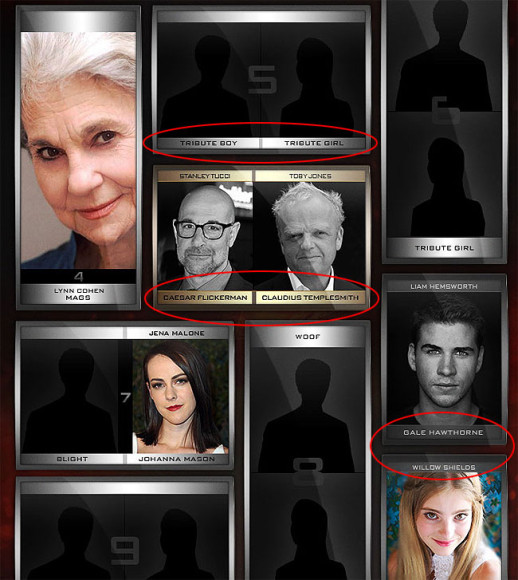 (click to enlarge)
If you take a look at the bars under the people listed so far, the Capitol citizens have gold bars, the Tributes have silver bars, and the District 12 residents have dark gray bars. I know people may look at that and point out that hey, Haymitch has a gold bar! But it should be noted that the Haymitch in the movie seems much more well versed and dressed in the Capitol ways than our drunken District 12 mentor from the books. Even Woody Harrelson said he wanted to give Haymitch a much more refined look. It’s not all that far-fetched that he’d be put into the Capitol category for the movie. Consider him a District 12 double agent!

So going on this colored bar “code”, the Mystery Woman has a dark gray bar, which presumably means she’s from either the Districts in general or District 12 specifically. This removes President Coin from the mix. Besides, I would think Alma Coin would be a card they’d want to play completely by surprise in the movie, not via a mystery casting announcement.

Hazelle Hawthorne, while definitely a possibility, isn’t really someone Lionsgate would want or need to hide. I mean, how anti-climactic would it be for you guys to learn that it’s just Gale’s mom? The same goes for Greasy Sae. Sure, they could end up being in Catching Fire, but they could be simply excluded from the casting page for being too small of a character. Romulus Thread, if rumors are to be believed, will be in the movie, but he’s nowhere to be seen on the page. Hazelle’s only two scenes from the book are a short conversation with Katniss in the beginning and a wordless scene when she comes to the Everdeen’s to watch over Gale. Greasy Sae only appears in one short scene at the Hob.

As for Annie Cresta, we all know what a huge role she plays with Finnick, but I’m still not sure if she’ll be in the movie. Out of all the theories, I think she’s the most likely if it ends up not being Madge. I don’t really see a firm reason for her being unnamed other than people are wondering if she’ll make it in. With very minimal presence in Catching Fire (Katniss sees Annie during her Reaping, when Mags volunteers for her), I place Annie in the same boat as Hazelle, Greasy Sae, and Romulus: in the movie, but not on the casting page.

On the other hand, when you get to Madge Undersee, there’s the big fuss in the past over her, which would be a great reason to shroud her announcement in mystery. Imagine the fan fervor when they see her face on that casting page? Can the same be said for the other candidates? Not in my opinion.

Bringing her back isn’t entirely impossible either because it’s plausible they’ll want to re-open the history of the pin. In the first movie, the old woman at the Hob wears this really sad expression on her face (thanks Savanna!) when she tells Katniss to keep it, as if keeping it around her is too painful. Madge can be introduced to Katniss in the mayor’s house and she could notice the pin, explaining the history of it being her aunt’s pin that they gave away due to it being too painful for her mother to bear any longer.

Since Madge’s aunt Maysilee Donner was in the Second Quarter Quell with Haymitch, this would also be a great opportunity for them to open things up about his past as well. With one scene and one conversation with Madge, Francis Lawrence can bring a whole lot of important back story out with minimal time consumption. I also think Madge’s absence in the first film could bring more to the scene when she brings the drugs for Gale because if audiences think that Katniss just met Madge, then it seems like an even bigger gesture if she does them that favor after having just met Katniss.

I’ve also begun to think that Madge could end up living in the movies. With the obvious fan support for her, there’s a lot of potential for her character if they were to simply merge her with Delly Cartwright. How great would that be? Sure, we’d lose Delly, but we’d gain a stronger Madge, one who suffers the severe loss of her parents in Catching Fire, then goes on to live in District 13 in Mockingjay, and helps to bring Peeta back.

I, for one, would love to see that happen.