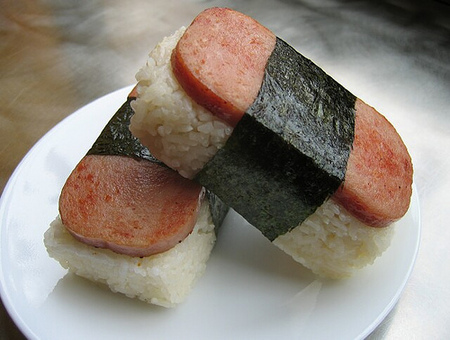 With many of the victors already here on Oahu (omg, freaking out), I thought some of them might appreciate a local’s guide to the melting pot of food we have here in the islands. It’s not just Hawaiian food, but local food. The stuff we all grow up on at home or eating out with friends.

Most times we don’t realize it’s a home food until we take a trip to the mainland and find out there’s no such thing as fruit punch at restaurants or spam eggs and rice at McDonald’s. And while I realize there are L&L’s on the mainland, I’m not a fan. (sorry)

So while they’re here, I’ve compiled a list of foods I feel like they must try before they leave at the end of December. Jennifer Lawrence has said many times that she loves food and hopefully she knocks off at least a few of these items because there’s so much more to food in Hawaii than Cheesecake Factory!

I lived on the Big Island for 18 years and have now lived on Oahu for 15, so in other words, I’ve lived here my entire life. I’ve asked friends and family to contribute to this, so some of it is not personally tested by me. If you’ve got your own personal recommendations, feel free to comment with them! I’ve kept most of it to town, since I’m guessing they’ll stay in Waikiki even if they’re filming on the North Shore. 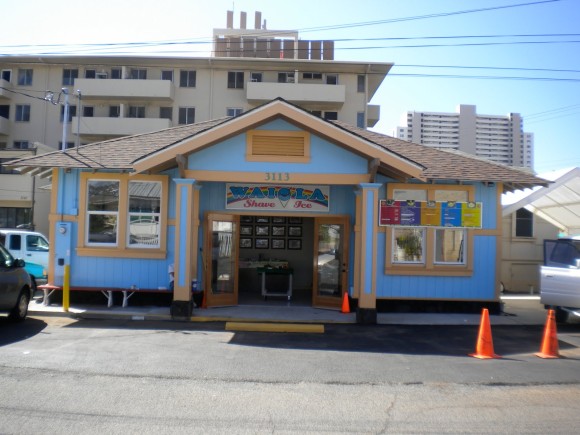 If there’s anything that screams Hawaii, it’s shave ice, though if you travel to the Big Island and call it “shave ice” you might get a few irate corrections that it’s “ice shave”. If you’re filming on the North Shore, the best and most famous place to stop is at Matsumoto’s Shave Ice. In town, however, to me there’s nothing like Waiola Shave Ice. There are two locations, one off King Street and one off Kapahulu. The Kapahulu one is pretty adorable, so I recommend that one.

If you watch Hawaii Five-O, yes, this is the preferred shave ice/informant store of McGarrett and Danny, but the location on the show isn’t real. You need to go to one of these two locations. Get the scoop of ice cream underneath and top it with condensed milk. I usually go for the Lilikoi and Mango combo, but you can never go wrong with Strawberry and Vanilla. 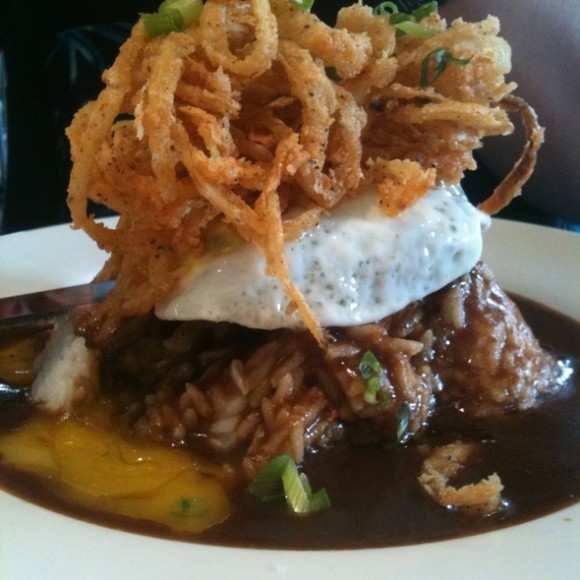 They probably serve these in California, so maybe it’s not new to the Hollywood actors, but it’s definitely something our Catching Fire Brit Sam Claflin should try once he’s no longer being force fed chicken and asparagus to stay Finnick-fit. A pile of rice is smothered in gravy, topped with a hamburger patty, and a fried egg. In the photo above, the loco moco from The Counter at Kahala Mall is also topped with fried onion rings. I haven’t tried it myself, but it comes highly recommended from a friend and everything else I’ve had at The Counter is amazing. Everything is ridiculously big though, so don’t be afraid to split things.

The restaurant was co-founded by Daniel Dae Kim from LOST and Hawaii Five-O, though he no longer has any ownership of the place.

If you do some island hopping over to the Big Island and visit my hometown Hilo, make sure you try a loco moco at Cafe 100, along with a gravy cheeseburger.

Image from Laurie on Foodspotting. 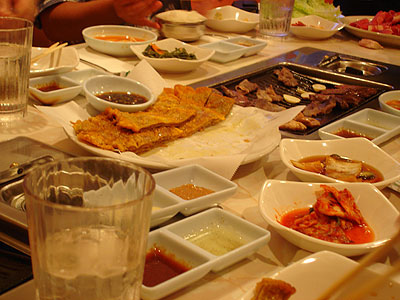 A Korean dish that’s extremely popular in Hawaii is meat jun. The thinly sliced meat is marinated in a sweet sauce and then dipped in egg batter and fried. It’s then sliced and served with a sauce, which can be sweet and tangy or salty, depending on where you go. Locals get into arguments over where the best meat jun is and when I was first introduced to it, my husband insisted on taking me to the second best place to try it before taking me to the best place just so that I’d have a taste reference.

You can start off by trying the meat jun at O-Bok, which is a small restaurant at Manoa Marketplace (very close to Paradise Park!). They serve it with a plum sauce that all my friends rave about, but I think it tastes perfect as-is. Another good starting place for meat jun is Kim Chee. There are like seven Kim Chee restaurants, but I’ve only ever eaten at Kim Chee II and Kim Chee VII. I have no clue whatsoever where Kim Chee I, III, IV, V,  and VI are or if they even exist. The place is a bit run down, but pretty much everything they serve is extremely delicious.

To my circle of friends, Yakiniku Million is the hands-down champion for meat jun in Honolulu (dish in the middle above). They’re open til 2 AM on the weekends, but it’s not the greatest area to be in late at night imo. 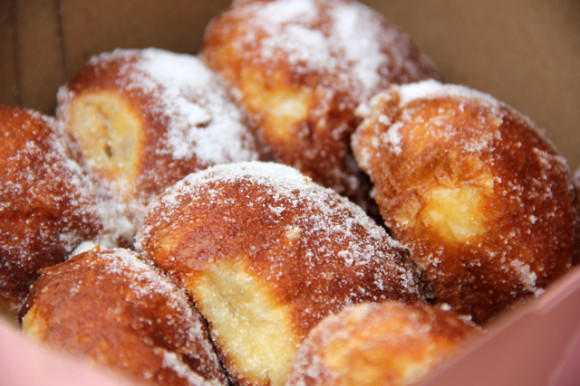 A Portuguese donut that’s deep fried and then coated in sugar, they’re like our local version of Krispy Kremes. Best eaten warm and fresh, the ones from Leonard’s on Kapahulu can’t be beat, though I don’t recommend the li hing mui ones. Leonard’s is right down the street from Waiola, so you could double up malasadas and shave ice! 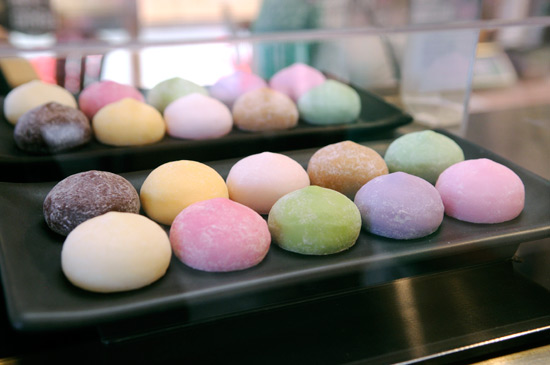 When you go to school at the University of Hawaii, one of the first places people want to take you is Bubbies, a small local ice cream shop that’s been open for as long as I’ve lived here, mostly because they want to watch you turn beet red as you read the menu and see items like Multiple Orgasm Cake, Keep It Up All Night, and Eat My Balls. Aside from their ice cream though, is the mochi ice cream. Mochi is a sweet rice dessert and Bubbies makes amazing ice cream filled mochi. 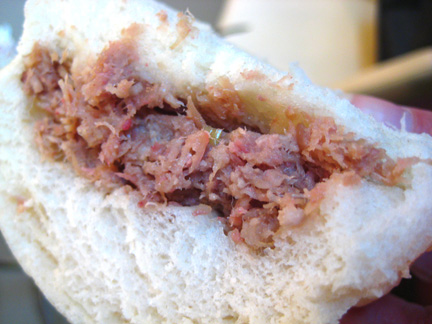 Katniss may love goose liver and puffy bread, but here in Hawaii we love roast pork in puffy bread. They sell these in 7-Eleven, but to me the best place to get manapua is Libby Manapua in Kalihi. They’re tasty, soft, and delicious. They also have great pork hash.

Pronounced poh-kay, this dish is usually raw fish mixed with onions and sauce, though there are all types of poke. It’s sold in lots of sushi restaurants as poke bowls, but I love the poke at Foodland, a supermarket. The ahi shoyu poke is the perfect place to start, though it’s been painfully pricey lately. I usually buy poke when it’s around $6.99 a pound but haven’t seen the price go under $14.99 a pound for months. *sad face* 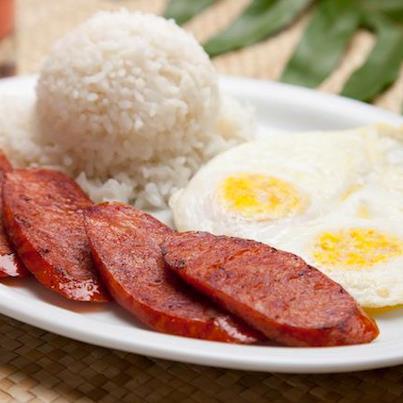 If you’ve seen 50 First Dates, you know we love our SPAM over here. Fried SPAM slices, eggs, and white rice are a pretty typical Hawaiian breakfast. Another version is Portuguese Sausage, Eggs, and Rice. The best place for a local breakfast in Waikiki is probably Eggs N Things, but that place is actually pricey and usually really busy, so they’re also available at Hawaii McDonald’s and also any Zippy’s restaurant. 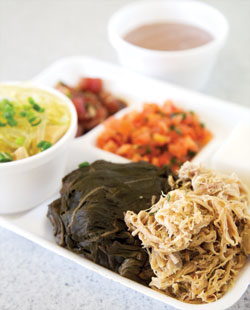 There are a good amount of places to get a plate of Hawaiian food including pork laulau (pork wrapped in taro leaves), kalua pig (smoked pulled pork), lomi lomi salmon (fresh tomato salad with salted salmon, onions, and green onions), chicken long rice (chicken soup with translucent noodles), and haupia (coconut dessert), but the popular favorites among myself and my friends includes Yama’s Fish Market, Haili’s Hawaiian Food, and Helena’s. 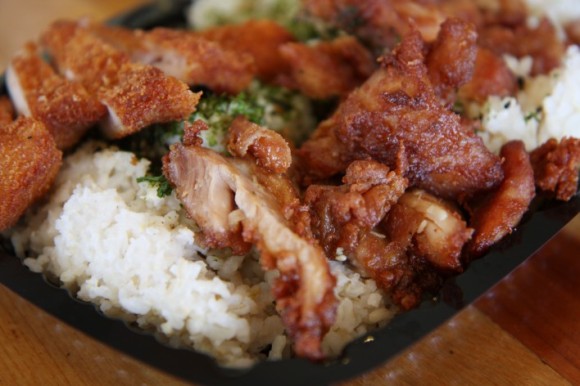 Mochiko chicken is simply chopped boneless fried chicken in a sweet rice flour batter. It’s crunchy and slightly sweet and incredibly delicious. A good place to get it is Sumo Ramen, though it’s a pretty common dish at plate lunch restaurants.

Ah yes, more SPAM! If you ask me, anyone who thinks SPAM is disgusting either doesn’t eat meat or has tried to eat it “raw”, which is really gross. Cook it and it’s a different story. Most Spam musubis just fry the spam and you’ll probably be able to find them all over Waikiki.

I make mine sandwich style with the spam in between two layers of rice and I cook my spam in a sauce to give it something extra. So while you can buy and eat them where ever while you’re here, here is my personal recipe (you can ignore the LOST related parts) that you can take back with you to where ever you live. My recipe has actually converted quite a few people over to Spam. 😀

Those are all the foods I think represent local Hawaiian cuisine very well. Here are some other quick suggestions.

If you want to eat rabbit like Katniss, I’ve tried finding restaurants that serve it with little luck. My better half raises them though, so if you did ever feel like it, backyard rabbit farmers like us are the only places I know.